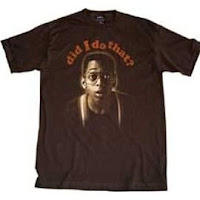 Yes, please use your best Steve Erkel voice when you read the title. When I came home from work, I was greeted at the door by a rush of ht air coming from inside the house. This can only mean one thing - AIR'S OUT! Holy cow! 90 degrees in the house when I walked in, air conditioner chugging away. I turned it off, of course. The fix-it guy is coming on Wednesday to..well..fix it.

I cannot help but wonder though... Did I do that?? In my zeal to clean the mold or whatever it was off the coils, did I mess something up? Was it the Mean Green? I checked the coils and some are bent, but for the most part, the majority are vertical as should be. They are dirty as all get out. I am hoping to meet the guy here so I can explain what I did, see if that has any bearing, and also to see if he thinks it needs a more thorough (read, professional) cleaning.

At first, it seemed to only show up when you put the brakes on, or let them off. I figured it was a brake pad gone bad. But, as time went on (yes, we put off having it checked out..), the squeak would sometimes happen without any real reason we could think of... say, during acceleration... I was determined to find the source, so on Sunday, I told Shan I would ride in the back and see what the problem was. Of course, I never made it that far.

After Sunday School, we were heading back home and came to a stop sign. A car was coming from my right, so I looked over my shoulder to see where it was. As I did this, I heard the squeak and turned my head suh that I could look to the back of the van. In the back, hanging from the passenger-side clothes hook, was one of Emily's dresses. I turned to Shan, asking, "How long has that dress been there?" Shan said, "Since her pictures at Sears." I asked Tyler to take the dress off the hook, and sure enough, our squeaking problem was cured.... Whodathunkit?

Did you watch the Rockies/Padres game on Monday night? The Rockies won in 13 innings. Well, the ump called the Rockies player safe at home, anyway. Replays show the catcher had the plate blocked, but the runner called safe anyway. Of course, that doesn't matter since there were other blown calls during the game. I didn't care who won, but I love Instant Replay/Challenges in football, and I think baseball should have the same thing. Let the coach challenge a call. If he's right, overturned. Wrong, and he's assessed an out. Harsh? I don't think so. If the challenge comes on the third out, then the out is assessed at next bat.

Of course, all I am interested in is Thursday when the Tribe takes on the Yankees! :-)

Is it just me, or does Boston Legal keep getting better, even though they dump some of their best actors? Frankly, I am not a John Larroquette fan. Never have been. He could leave the show and not be missed, unlike Rene Auberjonois... What happened to him?? Dang... I must have missed something.... And what about Claire Simms?? Dang, dang.... And Denise Bauer is on "maternity leave" but I read an article online that says she won't be back... Dang, dang, dang.... Oh well, I still love it!