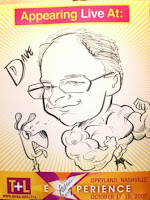 We ended up eating at "Cock of the Walk" for supper. It's been a long time since I've eaten at one, so the presentation was little different... They bring you tin plates and serve your drinks in tin cups (Marilyn called them "prison cups"). The food is all brought out on one big plate and everyone eats their "share" off the plate. They also brought us fries, hush puppies, cole slaw, and cornbread. It was all very good!

Went to Opry Mills Mall after that, where we did a lot of walking around, and I bought an Indians wallet and a window cling. I wanted a "Tribe Time Now" towel, but those are "game only" items. So, I did what any red-blooded American fan of the Indians would do - I looked on eBay. :-) I bought a white one, though I'd really like a red one, and may eventually bu a red one to go with my white one... :-) We'll see....

Tyler's homework brought up a question we were hard-pressed to answer. It seems easy enough, but the book's "correct" answer did not match ours: The band IS/ARE polishing their instruments. I was always taught that a group of people represented by the WHOLE is treated as the singular form of the word. thus, my answer: The band IS polishing their instruments. The book says the answer should have been ARE... I tried looking it up and I only got more confused, as I found that both ways were shown as acceptable. So, the truth is obviously somewhere in between. In retrospect, I wonder if the answer is "ARE" because of the word "their." Here is my thinking: The band is polishing ITS instruments vs. The band are polishing THEIR instruments. Notice the difference? When "the band" is treated as a single group ("ITS" instruments), the modifier used should be "IS." But, when "the band" is treated as a group of people ("THEIR" instruments), then perhaps that is where the modifier changes to "ARE." For a person that studied English as much as I have, you'd think I would know the answer... I don't. :-)

While shopping, John and I went into Bass Pro Shop. Talk about being out of my element. At one point, we found ourselves looking at the big fish tank they have on display with live fish. John is talking about the perch, and whatever other kind of fish they had, and then he asked me what kind of fish was the one he was pointing to. I looked at the fish, looked at John and said, "uuuuhhhhh... a fish?" Followed by, "And, really, for as big as that sucker is, I'm not even sure of that right now!" Yes, I am clueless when it comes to anything 'outdoors.'