Yes, that is an in-game screenshot (as posted on GiantBomb.com).  And, yes, I have been to that very spot.

Where is that, you ask? Why, it's in Skyrim.  Skyrim came out on 11/11/11 and it is an open-world, mostly open-ended role playing game.  I say "mostly open-ended" because, like all adventures, you ultimately walk through a series of scripted paths.  Well, might.  It is open-ended in that you don't *have* to do anything.  You decide to accept a quest or not. You decide, once you have accepted a quest, to complete a task.  Heck, even after you complete a task, you decide whether or not you want to finish it - for example, do you *want* to give the recovered gauntlets to the requestor or do you want to keep them for yourself?  You decide.

It's not a new concept. In fact, Skyrim is the next in the Elder Scrolls series of open-world games.  But, after playing Morrowind and Oblivion, I have to say, I like Skyrim A LOT!  Sure, it's got glitches...  One of the first sequences had me talking to a woman who faded into the wall behind her, only to "materialize" after the conversation.  And, okay, so you find randomly floating weapons, armor, bottles, plates, and even animals, during your romp through the countryside, but so what.  The scenery is flat-out gorgeous, the characters are mostly well-created, and exploring the unknown digital realm of Skyrim will suck hours out of your day that you didn't even know you had.  Granted, those hours may be the wee ones after everyone else in the house has gone to bed.

From the first dragon appearance to the bowels (yes, I said bowels) of various and sundry caves and dungeons, Skyrim sucks you in.  I've only played a few days worth.  I bought this past weekend and have played off and on since.  It is the kind of game that could make a person happily use up a week's worth of vacation time and not regret it.

There are definite improvements in gameplay over Oblivion (the game's predecessor):

One of the biggest complaints buzzing about always comes with the Elder Scroll games: system requirements.  The game requires multi core processors. The game requires a DirectX9 video card.  The box says the video card must have 512MB RAM, but Tyler got his to run on his dual-core laptop with a 256MB video card in it.  Granted, he had to dumb-down all the settings and ramp up mouse sensitivity, but it actually looks okay and plays very smoothly from what I've seen him play.

For the record, yes, we bought two copies - one for him and one for me. Target had a gift-card offer when you buy two games and since we both knew we wanted to play it, we each bought a copy.  Besides, there's the whole Steam thing. I hate Steam.  I've said that before.

Overall, though, I'm liking me some Skyrim.  And, having a Thanksgiving holiday come around the week after I bought a copy ain't bad, either!

Fire: Get out!
Tornado: Get under!
Earthquake: Get down!
Flood: Get up!
Pandemic: Get home!

I received an email from Apple, letting me know that they are not too happy with me... 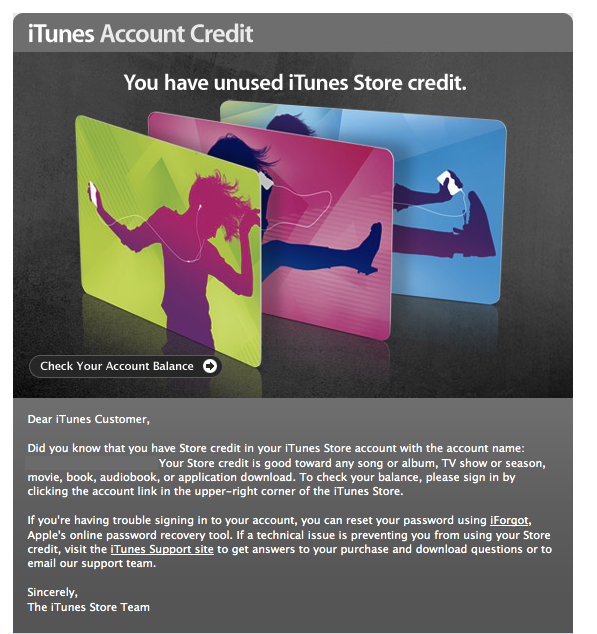 Apparently, Apple does not like its customers to carry a balance on their store credit.  How many other retailers do you know that send a friendly reminder for their customers to spend the money they have just sitting out there.  Perhaps, dear friends at Apple, I haven't found anything lately WORTH spending my iTunes credit.  Maybe the finger should be pointing the other way.
on November 12, 2011 No comments: