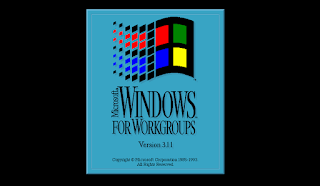 Way back in the day (circa 1994 or so, I would venture), I worked for a university where they were using Digital Equipment Corporation (DEC) VAX servers. The workstations were a mix of Windows 3.1 and WFW 3.11, though when I arrived, we were moving everyone to WFW 3.11. As part of the general network installation, we installed DEC Pathworks (I believe it was version 4.x), which allowed Windows machines to have file storage access to the servers. While that's all well and good, the real her in this tale is a little program that ran during the installation of the software and drivers.

During the installation, Pathworks created its own Windows Program Groups - a common thing to do for program installations. For some reason, during one install, the creation routine failed with an error about a problem in a BLD file though the actual extension may have been different now that I am trying to recall). Being the nosy characters we are, the tech guys decided to investigate since we had never head of a BLD file.

Turns out, the BLD file, which I believe was called PATHWORK.BLD (or something similar) is just a text file outlining group names and the shortcuts to go into the groups. I have tried to locate the actual file, but can't at the moment, so here is the sample file from the program's webpage:

The BLD file is just the configuration, though. The actual program to run is BUILDGRP.EXE, though again I believe DEC used a custom name instead, if memory servers.

During setup, a:\BUILDGRP.EXE PATHWORK.BLD would be executed, with the EXE referencing the specific configuration.

As you might imagine, this suddenly opened a whole new world to us! We created a slew of custom group installations for the users, running the program from a batch file stored on a floppy disk or on the network itself. You see, once Pathworks was up and running, the WFW machine had access to the network. So, we could call a batch file from the workstation and tell our custom group(s) to install themselves on the client machines.

If you're interested in playing with GROUPBLD, you can find it (along with a help file and the sample configuration above) buried in this Windows 31 DOSBox package.

I have no idea what made me remember all this. Guess it just PoppedInMyHead!
on January 28, 2020 No comments: