I had a wonderful birthday yesterday!  The family came over for pizza and "cookies & creme" dessert.  For those that don't know, the dessert is chocolate chip cookies soaked in milk, crumbled in whipped creme and all mixed together in  big bowl.  Simple, yes. Delicious, ALWAYS!

In addition to cash (so I could buy my own "fun-looking computer game"), I got some much-needed clothes for work.  I also received some other cool presents: 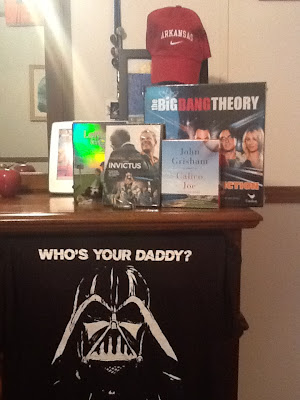 I love "based on a true story" sports movies.  I'm looking forward to watching Invictus!  I also got "Letters from God."  That should be a good family movie to watch!  I am REALLY looking forward to playing some BBT!  I didn't know there was board game! Haha!  I had asked for John Grisham's latest "Calico Joe," but I wasn't even sure it was on audio yet. Sure enough!  Shan said it was literally fresh off the truck!  They were bringing it in as she was asking for it. How cool is that!?

The Darth Vader shirt absolutely rocks!  And the Razorbacks hat has a story, which I will share because I know you are just dying to hear it.

As you may know, Tyler is playing baseball with the High School team this year.  During one of the games, the sky was a perfectly clear blue - no clouds at all, sun shining, great baseball day.  Well, over the years, much of my hair has jumped ship.  While I was sitting in the stands, the coach (who was my R.A. in college, and have known for many years now) came over to me and said, "I just told Tyler you need a hat. You're blinding the players!" Hahaha! Awesome!

So, Shan bought a hat for me to keep in the car for future baseball events.  That is love, folks.

Thanks to my wonderful family for my gifts and to all my friends for the birthday wishes throughout the day!!
on April 21, 2012 No comments:

American Idol - Was the save worth it?

Well, Jessica got the save last week.  Will it pay off this week?  Here's what we though about this week's songs:

Colton - Um. No. He sounds flat or off or something to me.

Elise - Hmm. I don't know about this. Tyler says the pitch is changing too much. I just feel kinda flat about it. Nothing really special.

Phillip - Wow, way to make an USHER song your own. This dude kills it. Awesome! Shan says not his best.

Jessica - Dawg, this girl really could sing "Yankee Doodle" and knock it out of the park. Seriously, ya gotta vote, and ya gotta vote for her.

Skylar - She's good, but I am getting tired of her voice. Could I listen to a whole album of Skylar?  I'm not so sure.  This is just "meh" for me.  Shan likes her and the song. :-)

Joshua - He has 'old school r&b' all over him, and I know I've said that before. Like Skylar, though, I'm not sure I could listen to a whole album of his singing.  He is more of a 'small doses' kind of singer for me.

THEN Songs:
Hollie - Ouch, rough start. Not as good as her first song.

Colton - Uh, no. Wow, way to ruin a great song. Please send him home. Thanks.

Elise - Nice start! Now, this is the perfect song for her and her voice.

Phillip - Oh, yeah! Awesome!  This boy can sing, groove and get funky! Shan says she sees in him what I see in Skylar - same thing over and over. Funny thing is, I could listen to him over and over.

Jessica - Um, what was that "wuhwuhwUHEARY" thing there?? No no no.  She is trying way too hard on this one. Ouch. She could see the bottom three based on this song. Wrong song.

Skylar - Wow, can you say "twang much?" At least she made it her own.

Joshua - Well, it ain't Taylor Hicks. He is not pulling off that "sexy eyes" thing at all. LOL. What was that!?  Not a fan here in me. The rest of the family liked it.

Colton - Not a fan of the low/high/whine thing. Meh.

Jessica - Wow. Man, she is awesome. No two ways about it.

Joshua - This is actually one of his better songs. Not bad at all!

Hollie - Nothing great. Not bad, but no superstar stuff here.

Phillip - Wow, for the first time, I am not into a Phillip song.  Slow start. Not really liking this one.

Elise - I like it. Nice job. One of her better performances.

*Emily had to go to bed early because of state benchmark testing.
on April 11, 2012 No comments:

Be careful when you choose your challenge questions and answers.

I recently had to log into a site I hadn't been in for about a year. When presented with the password recovery challenge questions, one of them was "Childhood Nickname." Now, since this was not a personal site, I knew it would not be my *REAL* childhood nickname, but rather one I made up that I *thought* would be easy to remember. I was wrong.

As it turns out, the answer was "The Gingerbread Man." Under what possible circumstance would I ever have come up with THAT as a nickname? And a better question still: How on earth was I ever going to REMEMBER that one?  I have no idea!

Just remember the next time you have to create answers to password recovery questions: choose wisely.

Someone once told me (and I have since shared this with other folks) that the best thing to do is ALWAYS answer with your favorite color - regardless of the question.  Former boss? Red. Favorite food? Red. First car? Red.  See? You'd never forget, right? Right?  Maybe not...
on April 05, 2012 No comments:

Here is our take on this week's Top Eight going back to the 80's:

Elise - UGH. Nasty low end junk there. Not a good start. Can we whine any more? No thanks.

Colton/Skylar - Islands in the Stream - Okay, weird staging. Not really feelin it. But, okay. "What-eva..."

Phillip - That's All - good choice. Let's see. Oh, man, this is awesome!  I am gonna download this one for sure. Nice! Too bad he didn't pick a Joe Cocker song!

Hollie/Deandre - I'm So Excited - Not bad, actually. Hollie is much better than Deandre.

Joshua - This is the way Joshua needs to sing. Shan says, "He is back on tonight!" And that is exactly right. Nicely done! Awesome.

Jessica - Uh, yeah! Duh.  Nice update to "How Will I Know!" She definitely channels some Whitney. Excellent!

Phillip/Elise - "Stop dragging my heart around" - This should be good. Not bad! A little off somewhere, but very nice pairing, especially for this song.

Hollie - "What a feeling" - This feels.. mechanical... for lack of a better word.  I dunno. Forced, maybe? Not bad, but not great.

Jessica/Joshua - This isn't bad, but they certainly do better solo than together.

Colton - "Time After Time" - Oh, okay, the perennial Idol fare. Every season, this song seems to creep in. Now we have some weird punk-ish version going on. Not a fan. I think he missed the point of the song. It's a no for me. Shan and Emily liked it.

Skylar - Wind Beneath My Wings - A bit nasal for me. But aside from that, this was the perfect choice for her!  Nicely done!