How does this work?  Well, each of us (Tyler doesn't play) picks whether or not we like the singer.  After the run down, I have some comments - sometimes humorous, sometimes droll, sometimes harsh.

Y = Yes, we like them and may or may not like the song choice.
N = No, we either didn't like them or the song or neither one.
? = Not sure how we feel.


Chelsea - Cowboy Casanova - Ouch. Not good on the that first run. Not bad. Not sure how I feel about her. Guess we'll see. She needs to work on her breathing and phrasing.

Erika - What about love - She sounds like she is trying to sing like Heart. I hope she shows more of herself. Then again, maybe this is her regular voice.

Brielle - Sittin on the Dock of Bay - Ouch, rough start. Let's see if it picks up. Whoa, what was that deep thing there? No. Shan heard about three notes and said, "NO!" Wow, this is flat or off or something. No, no, no. This is where we need a Simon to keep things real.

Hallie - Feeling Good - Sigh. What's up with picking these old songs? Oh, I know, this is a cover of a cover of an old song. Well, at least she did well.

Skylar - Stay With Me - Shan said, "She has a Miranda Lambert sounding voice." Yes, she does. She also has several stumbling blocks while walking around. I dunno about her.

Baylie - Amazed - Rough spots for sure. Ouch. She looks better than she sings.

Hollie - Reflection - Rough here, too. The chorus is better than the verses. Lows were kinda rough.

Haley - Sweet Dreams - Started out okay, then went a bit weird there. Too much background chorus. Drowned her out. Maybe that was the point. Not a great interpretation of the song. Not a fan there, man.

Shannon - Go Light your world - I like this. She's doing well. Very well done! Oh, man. She did great!

Jessica - I Love you I do - Okay, two notes in, and my jaw dropped. I'm sorry, how YOUNG is this girl!? Whoa, she has some pipes. She has a sore throat and I think she did better than half the girls here. Wow!

Elise - One and Only - Wow. Same song as Jen. She has some kinda weird annunciations. I can't decide about her.
on February 29, 2012 No comments:


Oh, YEAH! It is that time again!  We've got the Hendersons' picks for American Idol TOP 12, er 13, GUYS. We got a late start because of everything going on Tuesdays. The GIRLS wil be posted next!

How does this work?  Well, each of us (Tyler doesn't play) picks whether or not we like the singer.  After the run down, I have some comments - sometimes humorous, sometimes droll, sometimes harsh.

Y = Yes, we like them and may or may not like the song choice.
N = No, we either didn't like them or the song or neither one.
? = Not sure how we feel.

Reed - Moves Like Jagger - Well, there are moves. He is a wild one. I'm sure he's safe.

DeAndre - Reason something or other - uh. no. Not a fan of the whole falsetto thing. It worked for Prince. He is no Prince.

Colton - Decode - Oh crap. Is he the Adam Lambert of this season? ugh.

Jeremy - Gravity - Meh. Nothing special here for me. Not a fan all the whispering. Come man, SING. blah.

Aaron - Never can say goodbye - Welp, very weak start. And, this is why you don't sing a group song as a solo. Not the worst Jackson cover I've heard, but far from the best.

Creighton - True Colors - What? I would *NOT* listen to this on the radio.  Okay, let's vote this dude outta here. Wait, will he be this year's Vote for Worst? Hmm...

Phillip - In the air tonight - Man, now THIS is great stuff! I love his take on this classic! Wow! Awesome!

Eben - Set fire to the rain - LOL, Terry at work told me there was a kid who was trying to look like Bieber. This would be that kid. This is awful. Man, rough and ugly here... Is that flat? Sharp? I dunno. How about "way off."

HeeJun - Well, his Mom sure knows how to have fun! Hahaha! Great! - Angels - Wow. Surprisingly good start. Seriously. This is way better than I expected.

Joshua - You pulled me through - Very well done. Enjoyed it a lot.

Jermaine - Oh, wow!! I am SO glad they brought him back! He is awesome! Now, let's see how he does here tonight. Dance with my father - Busting out the Luther!  Oh yeah. He blows away more than half the other guys that sang tonight. This was a PERFECT choice.
on February 29, 2012 No comments: 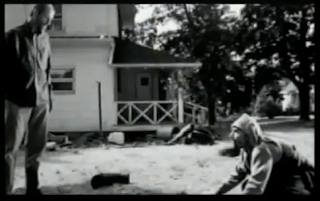 In case you missed it, I managed to find the answer to that "trivia question" I posted a bit ago.  The answer was "Dog Days," a short indie film about a post-nuclear/post-invasion America where a family is cut off from supplies as a man dressed as a dog befriends the family.  It is truly bizarre and mesmerizing at the same time.

I'm not sure where one can find the flick, but there is a brief snippet (about 3:00 long) on YouTube: http://www.youtube.com/watch?v=J0BIDWBnGDk

Now, of course, I've got to find it to watch again.

In the meantime, and I've posted this before, I am looking forward to watching "A Pure Formality" again in the near future as well.  If you're interested, here's the IMDB link: http://www.imdb.com/title/tt0110917/ 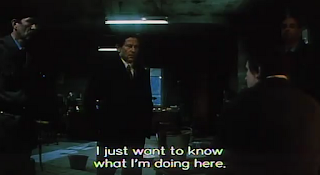 Okay, weird movie trivia time: What is the name of an indie film (a short, I think) about a family cut off after the US falls under new rule (er, I think that's why supplies were cut to rural folks). In the film, a guy thinks he is a dog (dressed in a dog suit and everything).

The father is finally convinced he should eat the "dog" to survive. Anyone know? I can't remember.

Mashable reports the changes in Apple's iBooks Author EULA (see link below), which essentially has Apple clarifying what they "meant" to say.  In a nutshell, if you use iBooks Author, you own the content. Well, that's nothing new.  What is new?

Well, you can distribute your work, so long as it does not include the files contained in the iBooks compilation file.  For those new to iBooks, files ending with the iBook extension, you can simply change ".iBooks" to ".zip" and have access to everything inside the iBook itself - PDF, images, text, etc.

So, the files included... Images, actual text files, included PDFs, videos, etc.  If you include those in your iBooks creation, you cannot distribute those outside of the iBookstore, according to my interpretation of the new EULA.