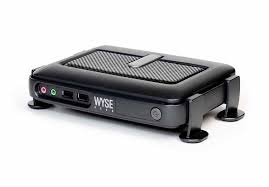 I bought a super-cheap Wyse Cx0 Thin Client off eBay some time ago, and I have been toying with it a bit. This post serves as a catch-all place for my information regarding the device. Note: information may be added, updated, or deleted at any time.

BIOS was locked with a password. Password for WYSE is Fireport. The BIOS allows user to change boot sequence and enable/disable some basic items. Very limited BIOS.

Since the storage is IDE, everything just worked when installing anything from DOS 6.22 to XP as far as install goes. My unit had 512MB RAM and a 128 MB DOM (Disk on Module) 44-pin PATA board.

I purchased a 2.5-inch ribbon cable (F-F) and a 2.5-inch IDE-to-SD adapter. This allowed me to swap out storage options at any time (er, with the top cover removed, of course).

Speaking of top cover, there are two plastic clips at the front corners of the lid, making it a bit of a hassle to remove. I snipped those off so that the lid can just come off when I remove the single screw (on back of unit) to open the case.

In every case, booting with USB keyboard and mouse already plugged in showed no problems installing/using the OS. The speed rating (Class) of your SD card makes all the difference! Be sure to use Class 6 or higher.

DOS 6.22 (512MB RAM, 512MB SD) - DOS installs easily from USB Floppy (or bootable USB). In order to install games like Wolf3d or Duke3d, I had to employ the use of MoSlo. Once the games were installed, though, the Wyse ran the games themselves just fine without the helper. Duke3d ran VESA 800x600 smoothly. The Secret of Monkey Island Demo played nicely in EGA mode (hmm, maybe it was VGA mode). There is NO SOUND BLASTER SOUND. The Vinyl HD audio does not have a DOS driver. I tried a variety of VIA-related drivers, hacks, etc and in each case, the dreaded "No VIA Chipset detected" message (or something similar) would appear. Programs that support the PC Speaker will output sound to the piezo speaker built onto the motherboard. This would make for a compact, spry DOS game machine if only there was sound support.

I installed DOS on the 128MB built-in flash and then after I swapped out for the SD/IDE adapter, I installed DOS to a 512MB MicroSD with an adapter. Works great!

Windows for Workgroups (WFW 3.11) (512MB RAM, 512MB SD) - Installed on same SD as the DOS install above. Windows would not boot. Either got a scrambled splash screen or a "Divide Overflow" error on a mangled splash screen. I changed various video settings and tried MoSlo, but nothing worked for me. I gave up trying to make it work.

Windows 95 (512MB RAM, 512MB SD) - Formatted SD with DOS. Copied Win95 setup folder from CD to SD card. Did not choose Sound, Network, etc during setup. Could not get any drivers to work (even though they came from the VIA downloads site).

Windows 98 (512MB RAM, 512MB SD) - Installed with no problem that I recall. Used LAN drivers from the XP Drivers file below. Could not get sound nor video drivers to work. I installed VIA Hyperion Drivers v5.24a and the VIA Retro Drivers (from here) along with the USB 2.0 Driver Pack (Here). After the install, reboot and the system should find new system-level devices. If asked to search for drivers, just click NEXT and let Windows find what it needs. I also recommend Phil's Win98 Easy DOS Mode PIF! More info here!

Windows XP (512MB RAM, 4GB SD) - Windows XP installs with no problems. Finding drivers, however, was a royal pain. To help with that, I created a ZIP file that has the XP drivers for video, sound, networking, and chipset. You can grab those here.

Windows 7 - (2GB RAM, 40GB 2.5-inch Drive) - Straight-forward install from USB DVD drive (though could have used a bootable USB). Install takes a while. Windows 7 detected sound and network. Using the OS is painfully slow. The system hits the hard drive in a nearly constant state. Attempting to download, install, then use Chrome was a smack in the face of the reality of the limitations of older hardware - especially running at 1GHz with only 2GB of RAM. Firefox was slightly better in that I could at least surf pages, download video drivers, etc. However, the video drivers reported that I had the wrong version of Windows (perhaps because Win7 wasn't registered during testing?). In any case, Win7 saw it was a vx855 chipset and allowed me to change to all sorts of resolutions.

*Note: I tried to install on a 128GB SD card and Windows said it could not install it to that device because it couldn't find a bootbale BIOS setting for it. I switched to a 40GB 2.5-inch IDE drive from an old laptop.

Windows 10 (2GB RAM, Various drives) - I tried a variety of drives (SD, 2.5-inch IDE) and each time, the installer gave me an IRQ Not Less Than (or whatever) blue screen. I never could get Win10 to install on this device.

Windows 8.1 (2GB RAM, 128GB SD) - Since Windows 10 failed, I thought I would try Windows 8.1 Pro. Note that at several times during the install, the system will appear to lock up. Just be patient. System will countdown to a reboot. Shut off the unit here. Otherwise, it will boot back to the setup USB drive. Initial setup took quite a bit of time. This will vary based on the speed of your SD and the throughput of the onboard IDE controller. Again, be patient. During setup, got an error that UUID was not supported and it logged me out. I then tried to log back in, and setup continued. Like Windows 7, setup detected everything except for the video card. And, like Windows 7, I could change to a variety of resolutions.

DOSBox Distro (1GB RAM, 16GB USB) - There is an interesting project that uses TinyCore Linux to serve as a loader for DOSBox. This actually worked decently on the Cx0. The software itself has issues. For example, some programs dump you back to the DOS prompt, but are actually trying to run in the Linux environment behind the scenes. You can't get to it, though, because task switching is disabled in the system. Overall, things boot and run rather slowly. However, you do get Sound Blaster sounds out of the headphone jack! There was no adlib music even though the games did detect adlib capability. Not sure what's going on there. This has potential promise as a workaround for running DOS games with Sound Blaster on the Cx0.