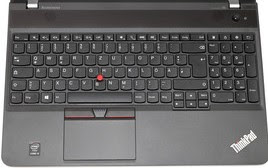 Have a user with a Lenovo E550 laptop. The laptop was working fine while watching videos, etc, but would sometimes appear to turn off without being able to come back on.

The Thinkpad light would come on (red light in the logo in the wrist rest area), but the unit would not power up. Fans would not spin up, no POST, no boot, no hard drive sounds.

We found several solutions that have worked intermittently  (that is, seemingly randomly):

As we find other solutions to this problem, I will update this post. Hope it helps!