We decided to go to Outback for supper on Saturday. The waitress suggested one of their specials (blackened perch topped with crab in a honey-butter sauce served with fresh steamed veggies), and it sounded good (and the picture looked great), so I ordered it. Now, when I ordered it, I asked if I could substitute mashed potatoes for the veggies. "Sorry, you can't sub on a special... kinda throws the whole 'no rules' thing out the window, doesn't it?" Yes, as a matter of fact, it does. So, I just had the potatoes on the side. In retrospect, I should have told them to just keep the veggies for the next person that orders them.

Now, I'm sure if you've been reading for some time, you may remember I am not usually a crab person. And, I'm not a veggies person... So, what possessed me to try this concoction? We've been watching the Food Network for quite a while now. Things look so good on there, and this looked so good, so I thought I would try it.

What the blankety-blank was I thinking!?

The perch was edible enough, but you know I'm not eating the crab when a bite of broccoli actually tasted better! UGH! Well, on the plus side, I had lots of room for the Milk Duds and Popcorn at the movie!

Without the LITERALLY in your face sex, it's a cute movie. Frankly, I'd spend my money on something else. 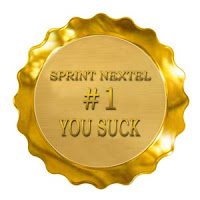 Sprint sucks. Specifically, the Sprint Store in Texarkana, Texas, sucks. Even more specifically, the customer "service" at that store sucks. Shan bought brand-new phones, which I have talked about before, and she has a bad battery or a bad phone. Not sure which, but either way, it is brand new. We had to do just about everything short of giving blood or children to get a response, let alone anything "new." Now, here's the kick - even though Shan has been there several times within the first 30 days, because this visit was after the first 30 days, the only replacement phone she can get is a refurbished phone. Ridiculous. They finally offered a new battery. They had to order it.

Frankly, I think we should pay the stupid $200 to cancel the contract and never look back, all the while making sure everyone in the world knows how bad that store sucks.

The kicker is that we do not have a problem with corporate, for they are the ones that fixed Shan's bill and told us to go to the store and demand resolution. I believe in the future, though, we will perform any upgrades over the phone directly with corporate. Maybe the T-Town store has seen "Good Luck Chuck" too many times already - they sure have the technique down pat.......

The Yanks Spank the Tribe. Holy cow... Indians get a jump on things, and then collapse in the middle of the game... EIGHT to FOUR!? It sounds better than it was... I just hope there was some kind of "Joe Torre Sympathy" thing going on there, and they get over it ASAP!!

Speaking of Joe... Can his butt. There was already a hullabaloo when he came on board. He can't deliver what the Yankees are supposed to be about. That is his job. Can him. Buh-bye...