Okay, let me get this off my chest, and then it will be time to move on: It was, apparently, NOT Tribe Time Now. I watched as the Indians came close to tying the game (of COURSE Skinner should have sent Lofton home, DUH!) and continued to watch as the Red Sox put their collective foot on the gas pedal, burning rubber and leaving my beloved team in the dust.

The players and administrators of the Red Sox surprised me with their remarks, talking about how classy the Indians are, what a great TEAM they are, how hard a fight there was. Frankly, I was surprised. I expected trash-talkin' and gloating. Of course the Sox celebrated, but they did it while tipping their hats to the Tribe.

I wanted the Indians to win. It's been a long time since I watched as many games as I did this year, especially during the post season. Ryan Garko has a blog at MLB, and the comments left by the readers are touching and sometimes poignant. Yeah, there are some stupid people cussing and gloating or whatever, but for the most part, Indians fans and Red Sox fans congratulated Garko and the Tribe for an incredible ride this season. A couple people even admitted to crying after they knew it was over, even before the final out.

There is something special about being a fan, a true-blue fan, of a team - whether baseball, football, pro or semi or college. Even though you may not have any real bearing on the game or the players, you FEEL like you do. You feel as if those folks are a part of you, and when you see them with tears running down their cheeks after a tough loss or you see them dancing like maniacs after a victory, it is as if you are there with them, sharing in their pain or joy. 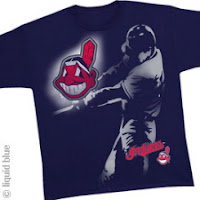 I have been a Cleveland Indians fan for many years, most of my life, really. I grew up in Pittsburgh, and though the Pirates have a special place in my heart, nothing compares to the attachment I have to the Tribe. After Game 4, I saw my team change. Something happened, and though they tried to get passed it, they never did. That is not to say our guys did not play hard. Not at all! They played their hearts out, but were ultimately unmatched. I have loved the Tribe though pretty rotten years (can anyone say 1980's?), and through some pretty great years. I will always be a fan of the Tribe. Get some rest, boys - let's get back here next year!

While in Nashville, I picked up some of Paula Deen's sauces and spices. So, for supper tonight (Monday), I had decided to marinate some chicken in her BBQ sauce. Yes, I am aware now that most people do not marinate in BBQ sauce, but that had not occurred to me. Anyway, Emily was upset when they got home because she wanted steak (gotta love that girl!). So, since the chicken was marinating, I decided it could keep doing that and I opened the steak and broke out the Southwestern Rub. We fired up the indoor grill and put on the steaks.

These are(were) very thin steaks. When it came time to flip them over, one of them tried to slip down between the "slats" of the grill. I saved it. A few moments later, I realized that I had not seasoned the side that was now the "down" side. So, I flipped the steaks over to season, and then flipped them back again. Stay with me...

One of the steaks (a different one than the previous escape-attemptee), slipped between the "slats" (I have no idea what he metal 'rods' on a grill are called). I tried to rescue it, but it continued to dive until it was effectively doing a head stand in the water at the bottom of the grill. Our grill requires water be placed in the bottom to help prevent drippings from scorching the sides of the grill.

When I tried to rescue the steak from drowning, it folded itself in half, as a means to mock me, and landed squarely in the water below. Without so much as a whimper, it fully submerged itself, lost forever. It had jumped ship, perhaps too spicy for human consumption.

I looked up my numbers for the Tennessee lottery. I lost. Not even a consolation prize. Maybe next time... :-)