I really should write things down

I've had several "Man, I need to write about that!" moments over the past few days. But, did I write them down? Of course not. So, what we have is a guy who is trying to maintain the integrity of cataloging random thoughts all the while he is FORGETTING what those random thoughts were! AUGH! So, I'll just see if I can force my memories to return. And, if that fails, well, who knows what else I'll come up with!

For starters, we bid farewell to Porter Wagoner. He passed away on Tuesday night. I really didn't get into country music until about 1990 (ironically or coincidentally about the time Garth stormed onto the scene). My Mom would listen to the Oak Ridge Boys when I was a kid, and I remember some country music and some "stars" - Dolly, Kenny (that's Rogers, kids, not Chesney who wasn't even a glint is his Daddy's eye back then). Anyway, I think I remember seing Porter on TV a couple times maybe. As I got older, I knew of him and that he was "some big gun in country music," but that is about the extent of it. For those of you who missed that part of musical history, I don't know what else he did (other than release a zillion albums or so) but it is my understand, he is the one responsible for bringing Dolly Parton onto the scene in the first place. I'd say that's a pretty big deal... From his web site:

Porter passed away peacefully last night, October 28, 2007, at 8:25PM Central Time, in a local hospice. All of his friends here at Gusto Records are deeply saddened by his loss. Porter’s family and his friends here would like to thank you all for your kind thoughts and prayers during this difficult time. Country music and the Grand Ole Opry will miss not only Porter’s music, but also his stage presence and his infectious smile. We will always hold him in our hearts, and his musical legacy will live on forever.

I decided to let y'all see the scanned article from the "Hope Star" newspaper regarding the 2007 ARDLA Award: 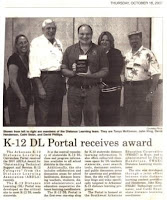 One really cool thing that is happening next week is Megaconference IX. This is a one-day world-wide videoconference. It is going to be super cool getting to see, talk to, learn from, and visit with people from all over the world throughout the day! It's happening on November 8th, and I was one of the first folks from Arkansas to sign up, and then somehow managed to light the fire for other folks in the state to join in! I've already heard from one district that is bringing six of their French students to the event!

In the middle of writing this, "The Singing Bee" came on, so I saved this and went to watch, followed that up with some "Biggest Loser" and then "Boston Legal." Somewhere in there, I went to pick up Tyler because he was coming home from their final football game. They won, which this season seems to be no surprise... The 7th and 8th graders of Prescott went UNDEFEATED this year!! How cool is that!? Congratulations to the Curley Cubs!

Speaking of "Biggest Loser," has anyone else noticed the blatent ad placements in shows these days? How about an ad for milk? Wait, how about an ad for Zip-Loc Steam bags? I'm sure there was a third, but by then I was so desensitized to them that I must have let it blend right in with the show. Anyone remember the "old" days when you had to cover up the name of the cola? Or better yet, get creative with the 'brand' of cola? No more - let's throw Desani water right at you ("When you are stuck at your desk all day, do curls with your water bottle." The water? Aquafina or something). For a long time, I thought ad placement was "cute" (Reese's Pieces in 'ET' - a HUGE mistake by the M&M guys!). I even spoke up when people were bad-mouthing ads in video games. But, now I have seen the light (a GE one, I'm sure, and not one of those stupid 'earth-friendly' jobbies either!). I am sick of blatent advertising. Look, place your products in shows and movies, just don't beat me over the head with it. I'm not an idiot - I'll see the thing when I watch. In fact, I may get so anti-ad that I'll personally ban buying anything mentioned specifically in a TV show! ROTFL, those of you that know even a little will see right through that little ditty! Like I am going to stop buying Coca-Cola... Yeah, right... Hey, I should be charging all those companies for mentioning them in my post! 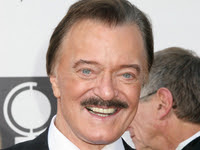 After all watching the shows of the evening, Shan read that Robert Goulet had passed away. I don't remember him, but do recognize the face. I have to admit (well, okay, I probably should NOT admit this, but what the hey) when she said "Robert," the only person that came to my mind was Elliott Goulet, which, it turns out, is actually named Elliott Gould. Like Shan said, "When you Google 'Robert Goulet,' how come it doesn't say 'Did you mean Elliot Gould?'?" That's what I'm sayin!

NBC and their 'sister' comanies are "Going Green" next week with some baloney-dog environmental crap on every show they run. I'm going to ned a stack of Mr. Yuk stickers, because I know I, for one, am going to be sick.....