Of baseball and trampolines 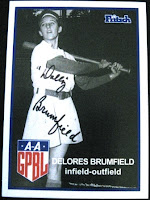 Our keynote speaker for today's final day of the ARDLA Annual Conference was Dr. Delores "Dolly" Brumfield-White. "Dolly" was a member of the AAGPBL (All-American Girls Professional Baseball League) from 1947-1953. She was only FOURTEEN when she was signed to play. In reality, she was allowed to train and watch for most of the first year because of her age.

It turns out she lives in Arkadelphia, AR, which is less than 30 minutes away from where I live, AND she was one of the PE coaches at the University where I went to college WHILE I was at that college. I wish I had known then, but I was not athletically inclined, thus our paths did not cross, so far as I remember.

She spoke to our group about life during World War II and what it was like to play baseball - a sport she loved (and still loves). She is now on the education advisory board for the National Baseball Hall of Fame, and spends much of her time doing public speaking engagements. She talked about the movie (which things were based on real events and which were creatively added (like the fact that the girls did not live in the 'sorority house' they showed in the movie - they actually lived with families near the fields where they were playing). She was paid $55 per week (twice what her teacher friends were making).

I was awestruck, and received an autographed card, too! As far as I am concerned, getting to listen to her is the same as if Bob Feller, Tris Speaker, or Cal Ripken Jr had been standing there. In fact, in a lot of ways, it was even better. We were talking to and listening to someone who had a part in an amazing time in history. A true living legend was standing before us, and she was as down-to-earth and laugh-out-loud funny as anyone could be! Listening to her story, and tales!, brought feelings of triumph and pride, and of heartbreak and sadness. I can only imagine the stories her children and grandchildren have heard over the years, and I hope they sit at her feet every time she spins one of her yarns.

Since there were parent-teacher conferences today, I went to the school to pick up the kiddos and a couple of their friends. They all played various console games until it was time for something to eat. I ran them up to Sonic, and we brought the food back to munch. After they were done eating, they all went out to jump on the trampoline. Now, I don't how the kids you know go about jumping, but ours took off their shoes (not socks). The mat leaves black marks on everything, and so, when the friends' Dad came to pick up the children, he saw that their feet and socks were blackened from the trampoline. He finally decided that the socks would find the trash can before the night was over. Em jumped in the tub and got a good washing off!!

I forgot to post pictures from the Eden's Edge concert! John took several pictures and uploaded them to Flickr. But, some of my favorites are these:

Hannah and her Mom perform, "Spoon River" together.

Cherrill and her sister perform a duet.