I decided last night that I was going to go straight to the vet this morning and check on our beloved Bud Kitty. All weekend, we held out hope that we would be bringing her home for at least a couple more years, but we also had to face the possibility that things were not going to go well for her. 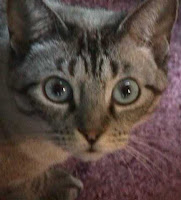 I got to the vet before they opened, so I had to wait a bit. I wondered how Bud was doing, if she was eating, sleeping okay. Was she alert and ready to break out of her cage, or was she weak and frail, waiting for her time to come? I wondered if I would have the courage to spare her more pain and misery if I had to give the word. I wondered if I could even give the word, and hoped, prayed, I wouldn't have to give the word. Maybe she would not quite be the Bud Kitty we know and love, but perhaps we could take her home and give her a few more years with some TLC... Around 8:00, the door opened. 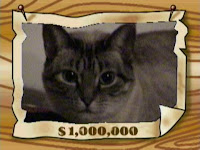 I went in, and hung out for a while in the waiting area, and then they said I could go back and see Bud Kitty since the doctor was running late. I went back to where she was and when I came in, she was laying in her litter box. She lifter her head and looked at me. With what I say was a sigh of recognition (finally, a familiar, loving face had come to see her), she laid her head back down. I stayed back with her for a while, and opened her pen, petting her for a good bit of time. She let me pet her and stroke her and she purred for a bit, but she wouldn't move at all. This was not "our" Bud Kitty. Our Bud would have let that go on for about 2 minuted before turning around and snapping at me, most likely growling and/or hissing in the process. THAT was the Bud kitty we knew and loved. So, I guess I knew what the doctor was going to tell me.... I told her goodbye, and i went back to the waiting room until the doctor came in. He arrived after 8:30, and in a few moments, they called me back to where they had brought her onto the exam table. 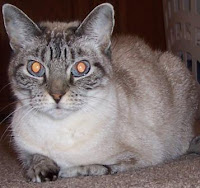 Bud Kitty was just laying there.. I petted her and stroked her, but she never moved... She looked around every once in a while, but mostly laid there with her eyes closed, and she looked even thinner than before. The doctor said he took the IV out yesterday because her leg was swelling. He did say that she used the bathroom when she was hooked up, but nothing was functioning on her own. Our worst fears had come to pass, and her time with us on Earth was nearing the end.

I asked him to put her down and asked if I could pick her up after 4:00, and he said I could. I honestly don't know how I got any words out, because I was choking on everything I said. The nurses were teared up, which kind of surprised me since they didn't know Bud Kitty, but they felt it too...

I was supposed to go to one of my schools today, but I didn't want to, and at least at work, I can break down and not worry about it.

Bud Kitty, our kitty, had a very, very good life. I know we always thought that we would come home and find her curled up somewhere, but at least I know I tried to help her, and I also know that she was not herself... I never really thought I would be so upset and so hurt, but I guess I really hoped we would be bringing her home for a few more years, even though I guess I knew better. 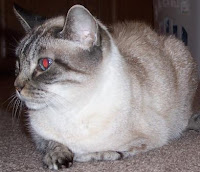 I picked her up from the vet after work. I had taken in a blue towel that she had used as a blanket on the way down there. They took her out and wrapped her up before they handed her to me. the whole way home, I was tempted to open the towel and open the bag she was in (I could tell she had been placed in a bag because I heard it when they gave her to me). I couldn't do it. I had seen her this morning, and though that is not really how I will remember her, I will remember that the last time I saw her, she was alive...

I got home, and everyone was in the living room, crying. We all cried for a good while.

We found a plastic box that we put her in and then decided where to bury her. We wanted to bury her under the large pine tree in the pasture, but the cows (and bulls) were hanging around, upset because the calves are being taken off tomorrow for sale. We decided that messing with upset and angry cows was not a good way to spend the last moments with Bud Kitty in our hands. We decided to bury her between the three tres in the front yard. It made a nice shady place, plus we do not mow there (only weed-eat). Emily, Shan, and I grabbed the tools and started digging. Roots, rocks, hard dirt, and hot temps made it a very sweaty, labor-intensive feat.

Once we were satisfied with the depth and width, we placed Bud Kitty into her final resting place. Shan said a beautiful prayer over our beloved Kitty, and we covered the site back up again. I will get some sand to help make sure she stays where we buried her, and we will get a marker for her.

I have a hard time thinking about (and looking in) the utility room where Bud Kitty's litter box, food and water dishes are. It's where her food is. It's where she used to spend days laying on the floor, soaking up the heat from the sun as it showed through the window in the back door.

I walked into the bathroom, and swore I saw her out of the corner of my eye, sitting on the edge of the tub on the towel that was there, as she has done many, many times over the years. Of course, it was just my mind playing tricks on me.

Tyler and I were sitting on the couch earlier tonight, watching TV. He leaned over and hugged me, and said, "It's been a hard year...."

Bud Kitty has no more pain, no suffering. She rests in peace, curled up forever under the shade of the trees.