Tyler and I played MVP 2005 with the 2007 roster updates last night. We had a lot of fun, though it was a close game! I won, but it was pretty much dumb luck.. LOL. We laughed, high-fived, and cheered or groaned (depending on what was happening). I feel as if I have stepped into my own Father's shoes - it's a nice place to be....

This is the article I wrote about the students at Genoa going to the Baseball Hall of Fame: 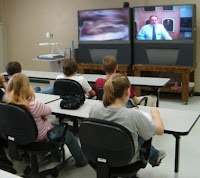 On September 10, 2007, a group of ten students entered the Distance Learning Classroom at Genoa Central High School. However, their regular teacher was not teaching that day's lesson. Instead, they were greeted by Mr. Richard Payne, sitting next to Lou Gehrig's Hall of Fame plaque hanging on the wall.

When the students were asked how many of them had been to Cooperstown and to the Hall, not one student raised his or her hand.

After a brief introduction and a quick video tour of the Baseball Hall of Fame, the students embarked on a journey into a lesson titled, "Character Education - Lou Gehrig: The Iron Horse." Through live interaction with the instructor based in Cooperstown, Genoa students answered questions, performed several acts of scripted role-playing, and discussed positive character traits of their friends and what their friends might see in those participating students. They also examined the life and character attributes of Lou Gehrig, analyzed documentation to determine how qualities of Lou Gehrig's character contributed to his success as an athlete and human being, and came to understand, through the interactive dialogue and discussion, why Lou Gehrig is an excellent role model. More information about the lesson can be found on the Hall of Fame website: http://education.baseballhalloffame.org/experience/thematic_units/char_edu.html

Following the lesson, the camera panned over and zoomed in on the latest inductees' place of honor. As the students asked questions about the Hall of Fame, they were shown Tony Gwynn's and Cal Ripken Jr's plaques. When one student asked, "What's the oldest plaque you have?" Mr. Payne explained how the "Very First Class" of Hall of Famers came to be honored, and the camera once again panned and zoomed, suddenly revealing the the plaques of those first honored at the Hall of Fame.

Costs of providing the lesson to the students were picked up by the Southwest Arkansas Educational Cooperative's Distance Learning program.

For less than the cost to fill up a school bus, students in rural Southern Arkansas traveled to up-state New York without ever leaving their hometown. Though the ten students had not physically set foot in the Hall of Fame, they can each say that they have visted Cooperstown and most likely learned more in an hour than most of the Hall of Fame's on-site visitors learn in a day.