I just finished watching the NFL Network's "Top 10 Worst Teams" and the Steelers were no where to be found! Honestly, I find this surprising, especially after last year. But, it turns out, there were teams that truly sucked eggs (the 1980 'aints!). I was keenly aware through my own memories of many of the teams they ranked in the top 10, and only a few were before my time. I found it interesting that many of them were in the 90's! If you get a chance to catch the show, I recommend it... Well, unless your favorite team happens to be on the list.... :-) 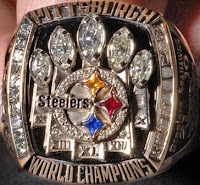 Speaking of Steeler football, we watched the "2005 Steelers" regarding the road to Detroit and the One for the Thumb. Though it mostly centered on Porter, Bettis and Big Ben, it was told in such a way that by the end, tears rolled down our cheeks.

Ben had promised Bettis that if the Bus came back for one more year, he would get The Bus back home to Detroit. In each of the last four games of the season, Ben gave Bettis the game ball, saying, "Here's #1...#2...#3," and finally, as shown in the picture above, he handed The Bus the game ball from the Super Bowl and told Bettis that it was Number 4, just as he promised.

While poking around the 'net, I did a search for Howie Mandel's old stand-up routines (No, I don't know WHY, I just did). Here are some on YouTube, including his 1st TV appearance.... I remember watching some of those clips when they really were shown for the first time. Heck, I was even quoting a lot of the routines while he was saying them, and they are still as funny now as they were when I saw them as a kid.