A day late and a dollaaaarrrr short.... 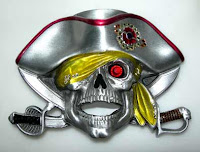 September 19th was "Talk like a Pirate" day. I forgot to say something about it, so I'll say something now... First of all, one of the baseball card sites I frequent did a couple cool posts featuring, what else, Pittsburgh Pirate cards! :-)

Back in the day, I owned a Commodore 64 when they were the newest things on the block. By far, one of my favorite games was, in fact, Pirates! (The exclamation point is part of the game's title, though I suppose it still could be considered exciting to have owned it....) You can even find screenshots and more about the game online... Basically, you get ships, sail around, attack other ships, steal gold, plunder villages, woo king's' daughters... All around good wholesome fun.. Oh yeah, and of course there were the swashbuckling sword fights! :-)

So, if ya missed it, just go into work tomorrow (er, tomaaaarrrrow) and tell the boss (er, cap'n) that you ain't swabbin no decks today, Matey! Or, when the cap'n asks for that report that was due, you simply say, "Aaarrgh! Shiver me timbers! The booty's been swindled by ye olde sea hag!" Though, referring to the boss' wife as 'ye olde sea hag' is likely to land you in the stockades... or the poop deck...