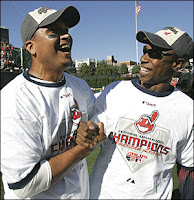 For the first time since 2001, the Indians head into the American League playoffs as the American League CHAMPS!! Could this be the year they go all the way? There is a lot of work to be done, if that's going to happen. Hafner, Sizemore, and a few others on the team will have to step it up. Sabathia, Westbrook, and the other pitchers will also have to be better than they have been. I know that seems harsh to say, but really, there is going to be some fierce ball playing in the playoffs.

But, really, as far as I am concerned, the fact that they kicked butt this year is AWESOME!! Congratulations to the Tribe!!

Tyler and I stayed home today (Monday) becuase we are both having major coughing fits with sore throats. We think Tyler's is from staying at a friend's house (where they smoke), and I don't know if mine of from going in to pick him up or if it something that has been building for a while... I was feeling a little sick Saturday night of the Eden's Edge concert... At any rate, we're both home sick. Took some medicine around 10am and will have some lunch around noon. We should be well enough to get back to work/school on Tuesday...

Speaking of work, I will be in Hot Springs for the next few days during the Arkansas Distance Learning Association annual conference. Should be al ot of fun, especially n Wednesday night! We are having a "baseball" night, and the guest speaker Thursday morning will be former All-American Girls Professional Baseball Leaguer, Dolly White!! :-) How cool is that!?!?!? :-)