I woke up at a little before 7:00 this morning. Not for any reason I could tell, but my body said it was time to rise and shine. After a quick shower, headed upstairs to breakfast. Today's breakfast was fried potatoes, scrambled eggs, bacon and sausage, biscuits, syrup, danish, you name it. 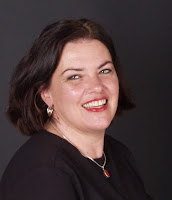 Jan Zanetis
The keynote speaker today was a hair better than the one yesterday, but really, I can't help but wonder where they find these folks. We are DISTANCE LEARNING professionals. We are in EDUCATION - whether K12 or higher ed. I think the keynotes for next year should be made painfully aware that WE KNOW WHAT'S GOING ON... DUH! We have one of the most extensive CIV networks in the country. We have twice as many systems as North Carolina, yet hold 4-5 TIMES the conferences at 4-5 TIMES the conference hours! DUH!

Today, we were told about the changing face of education. "You can't keep doing things the way they have been done in the past." Holy Lost Packets, Batman! Did she say we have to change!? The face of education is changing. DUH! We are the ones helping to CHANGE the face of education, are we not?? Look, I know we're in Arkansas, and Arkansas gets a bad rap for a lot of things. But, anyone who is asked to present in our state needs to be given some kind of "State of the Network" update before they even think of coming in here and talking to us like we are running everything on shoestrings and tin cans. We have OVER FIVE HUNDRED end points on the network, and that doesn't even include the systems that are not "officially" known.

Hello!? The people at this conference are the DISTANCE EDUCATION people in the state, many of whom should be (if they are not already) considered LEADERS in DL in one form or another. Of course we know these things!

Now, I will say that at least we were given some APPLICATION of the theories presented, and some "points to ponder," but it really bothers me when people come in from out of state and think we don't have a clue.

I hope that those of us in Arkansas DL continue to present at conferences like NECC, USDLA, etc. I love watching people's mouths drop to the floor when we begin to talk about what Arkansas, YES, Arkansas, is doing technologically.

For lunch, we were served 'wraps.' Soft whole-wheat tortillas wrapped around turkey, lettuce, tomato, cheese, and bacon. Oh, and mayo.... Oh yeah, and there was mayo on the wrap..... Have I mentioned the 10 GALLONS of mayo on the wraps!? UGH. I finally took a cue from John, and unwrapped mine. I ate the meat and cheese...

After lunch, several of us went to the Arkansas School for Math, Sciences, and the Arts. I had never been there before, so it was nice to see what the provider's campus looks like. It is an old hospital. It has been modified for the ASMSA (which is a place where advanced students can live on-site and get a specialized education). But, really, it's a modified hospital. Oh, and it's attached to an old convent. Frankly, it is one of the creepiest places I've seen in a while. These are lots of modifications, and they a lot of technology, etc, but all I really saw were old hospital rooms now serving as offices and DL teacher rooms. I don't know if it was a psych hospital or not, but I can understand why some kids go a little wacky in there and have to go home.

Having said that, what ASMSA does for kids is simply amazing. One student last years discovered a way to test for Meth by simply swabbing the wall! Another student a couple years ago did breakthrough studies in reproduction of something or other (sorry, forgot). This year, they anticipate their students will be offered $100 MILLION in scholarships! Last year, 95 graduates were offered $90 MILLION in scholarships. That says a lot about the programs and the caliber of students that come out of ASMSA. Still, the place itself creeped me out...

It also doesn't help that they had one of their PhD's attempt to remove a malignant tumor from his ear with a SOLDERING IRON! Hello?! (That was this past year!)

After we got back, several folks were hanging out, talking, so we did that for a while. John and I decided to go to Hibbett's to get ballcaps for tonight's baseball gala. Of course, they don't carry Indians hats out here in Arkansas (yes, I have Indians caps at the house, but they are AT THE HOUSE...). So, I snagged a Pirates cap, being from the 'Burgh and all! :-) Of course, generally, it's against the law to wear Cleveland AND Pittsburgh at the same time... :-) I figure since Cleveland is in the playoffs and Pittsburgh couldn't buy their way in, I'd be okay... :-)

After Hibbett's, we took a trip to Wal-Mart to see if John could find some white boxers for his son Chris. No luck, and we opted to stop by Scoops Ice Cream for a bite. Our logic here was this: get ice cream now, eat 'supper' at the baseball gala. I'm assuming they'll have hot dogs, etc... :-)

As we were eating our treats, I saw a former co-op tech, Sandra, walk by. After we finished, we walked down the strip mall, and found Sandra in the Christian bookstore. Turns out her sister works there. We chatted for a bit. Sandra had come back not long ago from a trip to Alaska (she is enjoying her retirement!), and says that if you ever take one cruise in your life, THAT'S the place to go. I'll file that away for future reference! :-)

Later, John and I headed off to JCP to see if they had white boxers. Chris is only allowed white boxers in the jail (yes, he said it was okay for me to talk about), and John is only allowed to bring THREE pair per visit. Why? Who the heck knows! Anyway, we found some at JCP. On the way there, though, the question came up about "pairs" or boxers. Why are they called "pairs??" I don't know about you, but I only put on ONE brief at a time... Why are they "pairs" of briefs? Or "pairs" of pants for that matter? The answer (so far as I have been able to determine):

In the "old" days, pants and undergarments really were separate items that were tied together (also, the origin of the expression "one leg at a time"). After the manufacturing process united them permanently, the terminology stuck: pair of pants, pair of underwear, pair of glasses... So, now you know....

Baseball night was very cool! I did not win the wiffle ball home run derby, but I had a lot of fun playing anyway! I think the biggest obstacle we faced was the fact we were playing INSIDE! LOL!! I did win a canvas tote, which I gave to a retiring member of the ARDLA group because she really wanted it, and, well, I have no real use for a canvas tote... :-)

(This got posted on Thursday because the goofy internet at the hotel would not let me bring up the blogspot pages. Go figure)
on September 27, 2007