the last days of Spring Break flew by too fast

I left off on Thursday with the Spring Break wrap-ups. Now, it is Sunday night and work will come way too early tomorrow. I'm not whining about it, just making a statement. I cannot whine about the fact that I get an entire week off of work based solely on the fact that I work in education. I am grateful for the perks of my job, especially with the way things are right now in the world.

Friday, we got up and hung around for a bit before heading to Wal-Mart for our weekly shopping trip. We ate lunch at Taco Bell, which we hadn't done in quite some time. As we got home from shopping, the time was very close for Mom's dog to be taken to the groomer. I jumped out of the van, grabbed the dog and headed down the road to her groomer. Meanwhile, Shan unloaded the van and put the groceries away.

After I got back home, I don't remember much because Shan and I fell asleep together on the couch. What woke us up was the phone, I think. Well, the kids had started cleaning the house while we were sleeping! That was very nice of them to do!

We all finished cleaning the house. If memory serves, we played a bit of Wii and generally hung out the rest of Friday. At some point, we played with Emily and her horse playsets (barrel racing and rodeo figures). Oh, yeah, what woke us up was the phone call to get Mom's dog...

Saturday - We headed to Texarkana to go see "Monsters vs Aliens" in 3D. First, we stopped by a store called "BeeHive Shoes." For whatever reason, the store looks HUGE from the Interstate. Once you get in there, though, the 'shoe store' part is very small - about the size of a small Payless of something. And they only sell women's shoes so far as we could tell. 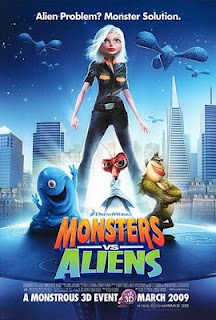 We got to the theater around 11:45am for the 12:30 show. The theater doors do not open until 12:00 noon. so, we hung out in the vehicle until they unlocked the doors. People had already lined up and the line was getting longer. But, the wind was blowing so hard and so COLD, we held out until we would not be outside for long. Of course, as we went in, people circled around to another door and started cutting in front of those of us that had been fighting the wind. We got our own laugh in the end, though. See, our theater has a line for people who are paying with a credit card and hardly anyone uses that line. We used the touch screen, got our tickets and went inside. As Shan and the kids got in line for popcorn and goodies, I grabbed four pairs of 3D glasses.

We waited in line for a bit, and it was taking too long. I told Shan and Emily to find us seats and Tyler and I would bring the food. That turned out to be a very smart move. The place was packed!

The movie was great. The 3D is done very well in most places. There were a couple places where the 3D seemed to hinder the movie rather than help it, but overall it was fun. One of the best things about it was watching and listening to all the children who had never seen a Real3D movie before. There was 'ooo-ing' and laughing, dodging and weaving from the things coming 'out' at us. Absolutely wonderful.

After the movie, we went to Shoe Carnival to buy Tyler some shoes. I thought Emily was going to buy shoes, but she was mainly seeing what she liked and didn't like. I don't know why, but that just hit me wrong and I lost my temper over the whole thing. There is no way to explain it, but let's just say things were tense for a while on Saturday.

We drove through Mickey-D's for one of the worst lunches ever. The fries were burned and had obviously been cooked in very old oil. Yuck! The burgers were okay, but even they weren't up to the standard. Eventually, we all cooled down and the night ended well. We got home and played some Wii and hung out.

Tyler set up Shan's FaceBook account and then promptly left to go to her Mom's house. Shan had to figure out FaceBook on her own, though she would ask me for help when things weren't making sense. I hate the new FaceBook layouts, and for a new user, it must be absolutely hideous. Shan struggled to figure out what was where, how to get where she wanted, etc. I told her that those of us that have been using FaceBook for a while were having similar issues.

During the evening, I ended up helping a friend figure out how to get her mail onto her new Mac. I have to say, it was very frustrating since neither of us is well-versed in Macs. Not only that, but we were doing it via FaceBook chat, which adds a level of difficulty (converting text into mental images). But, we finally got things working!!!

Shan has had quite a bit of fun adding friends, etc in FB!

Sunday - The last day of spring break. We went to church and came home to eat lunch. After lunch, we watched "The Soup" that we had DVR'd and then I worked on my baseball card database for a bit. Around 3:00, we headed up to the walking track.

Emily and I had a race too catch up to Shan. As we got to her, Emily suddenly went sprawling out on the paved path. She slid for a bit. She skinned her knees and a little bit of her hands. We finished the walk, went to Sonic for 1/2 price drinks, then got Emily home for some TLC. The more blood she saw trickling out of the scraped skin, the more freaked out she got. There wasn't very much blood at all, but the sight of ANY blood was sending the girl into a panic. After we got her doctored, she started to calm down and eventually was back to her normal self.

It's 8:15 as I am typing this, and the evening is passing away too quickly. The end of our week-long vacation (spring break) is coming fast.
on March 29, 2009