On the 6th Day of spring break

We knew that at some point this week we would be heading to T-Town for a shopping excursion. We took the lazy day approach and left somewhere around lunch time. By the time we got to Texarkana, we were pretty hungry. We had already told the kids we would go to Chuck E Cheese for lunch during spring break, and Thursday was the lucky day. 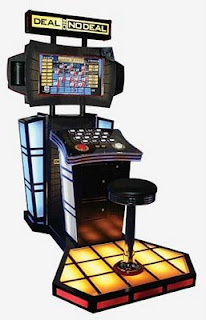 We had a coupon for 100 tokens and a large pizza with drinks. Worked for us. The CEC in T-Town has rearranged their games since we were there last, and they added new games. By far my favorite was "Deal or No Deal." Yes, you play DonD for tickets! You can play regular for up to 40 tickets or you can play 'Double Deal' and try for 80. The first time I won, I took 25 tickets. Well, I actually took about 113 tickets. See, the machine had quit spitting out tickets at some point. I don't understand why people do not hunt down the workers and get their tickets. Well, I was not about to sit idly by while the 'need to be dispensed' count rises higher and higher! I found a worker and he got the machine working. Naturally, I kept the 'extra' tickets. No one else was claiming them.

So, I took my tickets and went to the 'ticket muncher.' I have to say the ticket muncher is the greatest invention in ticket-based arcading ever created. I always hated carrying around a gazillion tickets. The muncher lets me cash them in for a slip of paper. Nice. Even nicer? When the muncher comes pre-loaded! I fed my tickets in, not paying any attention. When I hit the 'print' button, my total came out as 125 tickets. Wahoo! Bonus! Once again, no one was standing around laying claim to the tickets in the muncher, so I was the victor or the spoils. Well, not really. At the end of the day, the kids got all the tickets.

We played several games until the pizza came. we ate, drank, and were merry. After that, we roamed around playing various games, winning tickets (or not winning as the case was sometimes), having a good time. Emily and I had our picture 'sketched' while we were there. 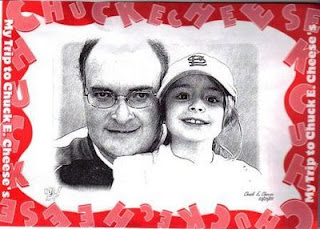 In the end, Tyler cashed in some of his tickets for a baseball-looking footbag (since they don't call them Hackey Sacks anymore). Emily oped for a pretty good sized stuffed/plush Tootsie Roll. She said she wants a Tootsie Roll purse to put it in so that it would have a good home. Tyler saved a bunch of tickets for 'next time.'

We left CEC and headed for Sears. While Shan and Emily looked at shoes and clothes, Tyler and I looked at electronics and tools. Have you been to Sears lately? Well, the one we have sports one of the smallest electronics sections I have ever seen. And really, I'm only a tool guy in theory. I like some tools, and I like to have tools, but really, I'm not very handy. In grade school, my nickname was "Handyman" because of my last name and my knack for finding solutions to various audio-visual equipment problems. Honestly, it was mostly dumb luck and some common sense - oh, and a deep desire to be the one to run the ditto machine.... Ahhh, the smell of mimeograph ink... I can still smell it.

Shan is wearing SIZE 10's now!!! That is AWESOME!! She had a great time trying on clothes and modeling for us. I cannot tell you how good she looks. I will post pictures eventually, but I have to get her to let me take them first. Any encouragement you can offer her in that department, please do.

We did a lot more shopping at the mall. Well, Shan and Emily did most of the shopping. Tyler and I just kinda hung around. Having said that, I will say that Tyler and I did buy some clothes. I bought a shirt for Easter and he got several shirts and shorts. He and I share shopping techniques - get in, get what you need, get out.

But, as I've said here before, when I know there is going to be a day of shopping, I don't mind hanging out while Shan does her thing.

After the mall, we went to Target. I am on several opinion websites, and the benefits of answering all those questions come in the form of free stuff. In this case, I had $40 in Target cards (or so I thought) and $100 in Best Buy cards. As we walked around Target, I looked through the computer games aisle, the DVDs, Wii games, baseball cards, etc. Now that I had these cards burning a hole in my wallet, I couldn't decide what I actually WANTED to buy. I took the cards out of my pocket and noticed that I actually had $60! Cool! That seemed to actually make the decision process harder. I finally decided to get a game I had been wanting for a while - FarCry2. Since it was only $30, I still had money left. I used it to help pay for the clothes bought at Target.

We left Target and dropped Shan and Emily off at Kohl's. Meanwhile, Tyler and I headed off to Best Buy. We walked around for a bit, again not sure what to buy. I decided the best option was a 4-way Wii remote charging station. We have a two-banger, but we seem to always run out of charge on the other two remotes. So, this way, we can keep all four charged up. Plus, after Emily saw it, she fell in love with the pink battery cover the unit came with. It actually came with four different colors: pink, blue, black, and grey.

As I was paying, I realized the Best Buy cards were not marked as to their value. So, I handed one to the cashier. $10 card. I pulled out another. $30 card. I pulled out another, at which point Tyler said, "Man, you're like magic! You just keep pulling them out. Think you could pull some out for me?" I laughed, and simply said, "Uh, no." The last card was enough to cover the charges and I still have change left over on it. Plus, I still have a full $30 card to boot.

Tyler and I headed back to Kohl's and waited outside for Shan and Emily. And we waited. And waited. And then we waited some more. I finally told Tyler to text Shan. A little bit later, she texted back and asked if we were there yet. We had been sitting in the parking lot for almost 30 minutes. I just had not communicated that to Shan. She said she and Emily had been wandering around Kohl's waiting for us. Communication FAIL. Oh well, by this time, I was hungry for supper, so we headed over to Texas Roadhouse.

You would think that would be the end of the day. Nope. You see, after we got home, Shan put away clothes and I loaded up my game. Emily got in bed and asked Shan to read a story. Poor child fell asleep before Shan could even get into the bed herself. That was one worn-out girl. Shan got in bed and it wasn't long before she, too, was asleep. Me? I stayed up and played my new game. My 6th day of spring break didn't end until about 4:30 in the morning of the 7th day!

I'll be 40 next month, and I still love staying up until the wee hours playing computer games. I am my father's son.
on March 27, 2009