If you're a regular reader (and you know who you are), then you know my Mom has been in the hospital outside Pittsburgh for almost a month now.

Well, today, she called me herself to tell me that she was "getting sprung" from the place! She said the doctor has her under restricted travel, so she'll be staying with my Aunt for a bit until he gives her clearance to come home. This works out, since her original plan was to be out there for her best friend's open heart surgery.

Turns out her friend's surgery got postponed until next week, making everything fall into place very well. Hopefully, Mom will be back the Monday after the surgery and we can all get back to 'normal' (as normal as they get around these parts, anyway) lives.

I am looking forward to having my Mom back. I am also looking forward to my Mom taking her dog back. I am not an animal person. I tolerate pets as much as I am not mean or abusive or anything. I just happen to be one of those people that believe pets are just that - pets. And really, they annoy me more than anything else. Having said that, I do have to say that my mother's dog is not the worst dog in the world by any stretch. She's a Shih Tzu. Yes, it takes everything in my being not to make that sound like something else. She only yaps every once in a while, and we've been training her not to constantly scratch at the door when she wants in or out. For the most part, there's no whining. And the dog is basically quiet, too. :-) (That might take a second to sink in) 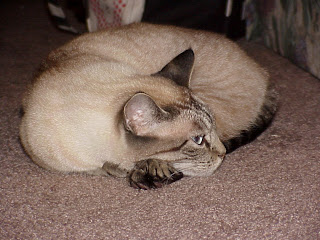 We had a pet we loved dearly - Bud Kitty. That's it. That's all we want. My kids LOVE pets. That is why we send them to each grandparent because they have animals. Get your 'pet fix' somewhere else. When they are grown and move away, they can all the blankety-blank pets they want. As long as those pets do not jump on me, lick me ANYWHERE let alone the face, and basically stay quiet when I'm there. If those pets cannot cooperate, my kids can come visit me anytime they want, sans pets!

I know I've said this before, but I love what I do. The main reason is because I never have the same day twice. This morning, I wrote up a few descriptions for some summer workshops we are conducting. Then, I met with AT&T regarding Plexar phone systems with a discussion about IP phones. Since we will be building a new building soon, I get to spec out the phone system to be placed in it. After that two-hour meeting, I headed down to LA (Lower Arkansas) in order to run a network cable for the pre-school there. And, of course what I thought would be a 15-minute job turned out to be a couple hours work.

It's my fault though. I did not bring the right tools. I did not realize I did not bring the right tools until I was already there, of course. Basically, the wiring had to run from a classroom through two walls to the network equipment (which is in a teacher's office). My plan was to make a hole that extended straight through the walls. The first problem came in the way of distance between said walls. It was a tad further than I had thought when I did my first walk through. And, no I did not use a measuring tape - that would have made things easy. I also did not bring a, oh what is that thing called that lets you make holes in walls.... ah, a drill. Again, why make life that easy?

Instead, I opted for the "screwdriver-through-the-wall" method (like the guy above). Of course, the one I had was Phillips and dull. It also turned out to be about an inch or so too short to be effective. With some effort, though, I managed to make a small, neat hole in the wall. I left that room, went around to the other side and realized that I had no idea where I had made the first hole. See where that whole 'tape measure' thing would have come in handy? Well, I did what any self-respecting guy would do - I used the screwdriver as a measuring stick. The hole was 13 drivers away from the outside wall.

Of course, the teacher's room had a massive heating/cooling unit along the same wall I was trying to get things done, so my '13-stick' measuring was... a little off. Not a lot, mind you. Heh-heh. Yeah, it was a lot. There was no way for me to know this until I made the hole and could not see light. Okay, back up and punt.

I take another "measurement." Only this time, I use the duct that goes from the air unit through to the other room as a point of reference. I get 12 screwdrivers. Wait a minute, that can't be right. Heck, I had THIRTEEN before! Something is not right. Yeah, that 'something' turned out to be the fact that the "outside" wall did not end in the same place for each room! You see, they were about three screwdrivers off! I eventually conned the teacher out of a slightly longer (though basically just as useless) screwdriver and a hammer. These made things go faster, though not necessarily smoother.

I snaked the cable through the one hole and used some serious eye squinting to guide the wire to the other hole. Success! Oh, did I mention that the wire I was using was a short piece that I had cut off in order to try and measure the distance between the vent/duct and where I wanted the hole? Yeah, so that piece was about two feet long. I was going to need about 20 FEET of cable to get from the computer to the network switch. Nice.

I thought about using the old "tape two cables together" trick and use the short piece to pull the cable coming out of the box. But, that really only works with electrical tape. Scotch tape will work in a pinch, but I knew it would not hold for what I was doing. Great.

So, I pulled the short piece out and snaked the boxed wire through the holes - eventually. Once that was all done, I put the ends on, tested things out, showed the teacher how to surf the web with her SmartBoard, and headed back to the office.

By comparison, yesterday (Tuesday) I held a meeting with the area school techs to discuss Stimulus money, E-Rate retooling, summer workshops, and watched a presentation from AlertNow. Then we went to lunch.

Oh, and then later that afternoon, Skip (the AlertNow rep) called to ask if I could FedEx his laptop to him. He left it at our place. It was already 3:30, so I told him he wouldn't get it until Thursday. He said that was fine.

Then he called back to ask if he could pick it up the next morning instead. We told him that would be fine and he could get it at 8:00am. You see, by this time, he was somewhere in Louisiana about 3 hours away.

At nearly 4:00pm, he called to say that he was heading back our way because he had reports he had to complete that night. Could I leave the laptop somewhere he could get it? There was no way I was leaving it out somewhere or even with a local gas station operator. Nothing against them, but you just don't leave someone's life laying around like that.

We eventually decided he could drive to Prescott and I would meet him for the exchange. He was "about two hours away."

Well, in about an hour and a half, he called to say he was in town. Normally, that's not so bad, right? Well, I had picked Tyler up from school and we went to get something to eat. On the way home, Tyler said, "I have a feeling something is going to happen." Sure enough, just as I pull up to the house, I get the call. We live roughly a 10-minute drive from the town center. I drop off Tyler and head back to the place I had just left about 10 minutes before the call.

I met Skip and gave him his laptop.