I have come to realize that I have a very low tolerance for bull crap. Look, I don't know everything, and I will never claim to know most things. But, when it comes to the general concepts of networking, DSL, etc, I have a pretty good handle on it.

When something isn't working right with my DSL, I call the tech support line like I'm supposed to. I realize the person on the other end of the phone is some high school or college kid that CenturyTel just hired. I also realize that the kid has to follow his script and may not deviate from it, even in the event he should encounter someone that has been through the process a hundred times or so.

But, what I cannot handle is the line of bull that we customers are handed because the rep thinks we don't know anything. On top of that, I really wonder just how many people are being taken advantage of just because they don't know what to say or how to say the 'right thing' to get the job done. 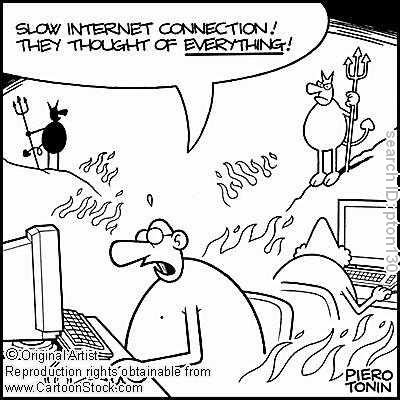 In my case, our DSL has been "zipping" along at a whopping 256k. For those that don't know, I am being VERY sarcastic. Our connection speed here in the boonies is supposed to be 1.5M (that is about 6 times faster than what we were getting at 256k). I called tech support a few days ago, and they would have someone look into it. I heard nothing of course. I waited until I was pulling out what little hair I have, and I called back. Again, they would have someone look into it and I told them to CALL me.

Today, I took off half a day from work to wait for Mr. DSL to call. He finally did. the conversation went something like this:

DSL: "I understand you're having some kind of problem with your DSL?"
ME: "Yes. Yes, I am." (I love Phineas and Ferb...)
DSL: "Okay, what's the problem?"
ME: "Well, I am connecting to your network at a whole 256k."
DSL: "Is that verified or just your own observation?"
ME: "Well, let's see. When I http into my DSL router, it shows I am connected at 316k upload. I've run several tests on the CenturyTel Speedtest site, and each time, it shows 256k download and about 150k up. My local network is buzzing along at a gigabit, so yeah, I'd say it's verified."
DSL: "Oh. Well, what speed are you expecting?"
ME: "I'm 'expecting' 1.5 megs, since that is what I am shelling out too much money for each month." I was a little peeved.
DSL: "Hmm. Okay, well, they made some changes here recently. Let me check a few things out and I'll get back to you."
ME: "Thanks."

I should have paid attention to how long it was before he called me back, but honestly I was too wrapped up in adding a ton of Indians cards to my collection. In the middle of a furious data entry session, the phone rang again. Caller ID told me is was you know who.

DSL: "Okay, we figured out what the problem was. After the system changes, your connection was reset to the default."
ME: "You're telling me the DEFAULT speed for DSL is only 256k!? You're kidding me!"
DSL: "256k is the speed at which most of our customers in this area connect."
ME: "That is ridiculous. Let me check things out."
DSL: "Check your settings and tell me if you see better performance." (Isn't that what I just said?)
ME: "Yeap, 1750+ upload. Looks good. Thanks."

I cannot believe the 'default' speed is 1/6th of what most people that have DSL would call 'low-end.' Yes, that's right. In most places that have DSL, 1.5Megs would be considered the 'default slow speed.' Even in Hope, you can get 10Megs for about the price we pay for 1.5Megs. Stupid.

What really chaps me, though, is that there are users who are on the same leg of DSL that I'm on, and they have no idea that their Internet is crawling. I take that back. They know it is, they just don't know what to do about it. If they call CenturyTel, the rep will say everything looks good. Yes, it does, *IF* I were running 256k! I'm not! Hello! So, those users (some of whom read this, thankfully) see slow connections, they should call the DSL hot line and tell the rep that they were told a system upgrade had been done and that their service has been wrongly reset to the 256k setting.