Asia'h started off the night with "I wanna dance with somebody," and she did a great job! Kady sang a song I didn't know (or didn't recognize anyway). She has pretty good control, but I think I fell asleep during the song. Shan likes Kady but didn't like the song itself. Amanda surprised no one by singing Joan Jett. I thought she did a great interpretation, though a lot of it was kinda straightforward. Carly sang a great rendition of "Drove All Night!" Man, the girls are kicking the guys butts up one side and down the other. Christy pulled out classic Journey "Faithfully" and put something of a country twist on it. We'll see if it was good enough to stay. Ramiele, for us, was kind of a let down. Such a good song (Take a look at me now), but as Shan said, "I don't think Phil is too happy with her" though she still did better than nearly every guy. Brooke went after some Pat Benetar (Love is a battlefield). She put her own spin on it, but that's not necessarily a good thing. Shan said she kept expecting her to start singing "Jolene, Jolene." LOL, she summed it up perfectly!! Syesha's "Saving all my love" was beautifully done. That girl can hit a high note! Like I said, the girls slammed the boys. It's too bad this isn't a truly open competition because some great girls are going home while awful guys will still be here....


I did not start my day off with the intentions of losing everything on my EeePC. In fact, doing anything with my EeePC hadn't crossed my mind at all.

To tell you the truth, I'm not even sure how it all got started. When I got to work, discussion began regarding Windows XP on the EeePC. Because we just bought 16gb SD memory cards. Now, you can find steps to install XP on an SD card all over the net, but they involve much smaller cards than we have. I figured I could skip some steps, right? 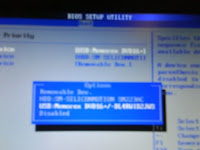 Well, the first step I actually took was to go into the setup and disable the built-in hard drive. That way, when XP started installing, it would only see the memory card. It worked like a champ. Except for the fact that XP wouldn't actually boot off the SD card. Okay, back up and punt.

We also recently bought usb-powered hard drives. I figured that should be a no-brainer. I installed XP to the usb hard drive and it actually tried to run setup before greeting me with a blue screen of death. Now, keep in mind that I had not checked into steps for running XP off a usb device. Well, it turns out the wiz-bangs at microsoft did not make it easy to have xp actually run from a usb drive. There are some convoluted steps that have to be taken BEFORE you install XP. Ooops.

No problem, I thought. I would just re-activate that internal drive I had disabled before I started and everything would be hunkey-dorey. WRONG! It seems that even though the internal drive had been disabled, the actual BOOT segment was still alive and well, so when XP installed, it put a little bit of itself in there. When I tried to boot the EeePC, the computer simply told me that it could not find NTLDR (that mean it can't boot!). Oh, and the "save-your-butt" F9 feature disappeared when NT tried to install... Wonderful...

So, in order to fix this, I could have waited until I got to work the next day, but why would I want to do that? So, instead, I blew away a U3-enabled flash drive, installed the recovery system from the EeePC DVD, then reinstalled my EeePC back to the fresh-out-of-the-box state. Well, sorta. It seems that restoring in this fashion gives you a slightly different setup than the F9 restore had. But, it still worked!

I added my additional, custom repositories and installed the advanced desktop (acts like XP, with a "launch" button instead of start). WHEW!

My next trick was figuring out how to get my U3 launcher back onto my flash drive. Turns out it was pretty easy, so now everything is basically back to the way it was before I started this morning.

If anything, I have one heck of a learning experience under my belt!