Emily spent the night at a friend's house on Friday night. It was the first time she ever spent the night away, except for staying at one of her grandparents' houses. I didn't think she would make it without calling home, but she did just fine. We were told that around 11pm, the lights were turned out and shortly after that, the girls were fast asleep.

She said she had a lot of fun at her friend's house! I'm sure they laughed and played and giggled about all the things 5 year-old laugh and play and giggle about.

Since Emily was gone and Tyler was next door, Shan and I decided to rent a couple movies. We finally decided to get "Dan in Real Life" and "Blades of Steel." The only reason we picked up "Dan" was because we had seen a Rachel Ray show where she went on and on about it. Her special guest was Steve Carell and he was hilarious during the segment. I am NOT a fan of "The Office" at all. I think it is one of the dumbest shows ever, but I know that is because I don't like the style of humor. Steve Carell, outside of that environment, is a very funny guy.

If you have not seen "Dan in Real Life" yet, I recommend checking it out. It's one of those "feel good, cute" movies that has a few funny moments, but is mostly about a clueless Dad that finds his 'center' after the death of his wife. It has some pretty corny moments (like the "A-Ha moment Steve has near the end), but the shower scene is very funny! 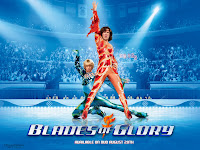 We also rented "Blades of Glory." Why? We have no idea. It was there, we wanted a stupid/funny movie, so we got it. Shan did not think it was as funny as I did. I was rolling on the floor several times during the movie. Okay, some of the innuendo stuff was more eye-rolling than funny, but the cameos by figure skating notables provided some of the funniest bits. Yes, I'm one of those guys that have to have a dose of "stupid" humor every once in a while, and this provided just enough to tide me over for a while. 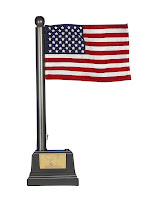 The US flag that Mom had placed on Dad's grave was worn and torn, so while Shan and I were at Wal-Mart, we tried to find one that was the same size. They only had really tiny ones or ones that were bigger than the one Mom removed. So, we got a couple that were close. While looking though, we saw the "Self-Waving" flag that plays a march while it automatically waves. We are pretty sure Dad was looking down on us from Heaven, pumping his fists in the air, laughing and yelling out, "Yes! that's the one!" If it had been weather-proof, we would have bought it in a heartbeat! It had my Dad written all over it.