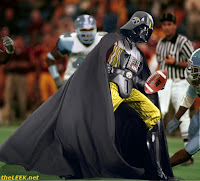 While I was poking around the Internet at lunch today, I came across the Darth-Steeler you see above. I thought it was pretty cool!

But, after seeing it, I decided to make my own "Darth Steeler!" I pulled a picture of Darth into Paint and added the yellow accents and the Steeler logo. Then, I pulled it into Photoshop and added the trophy (tilting and scaling so it sorta looks like he's holding it). I also had to make a copy of Darth's hand so that I could superimpose it over the trophy (again to make it look like he is holding it). After I did that, I thought it would be cool to have the confetti from the Hines Ward kissing the trophy picture, so I found that and added it to the background! LOL, so here is MY version of "Darth Steeler:" 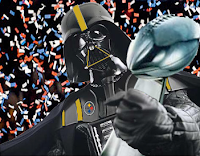