Brotherly SingStar, EeeGPS, and then some

In no particular order, here are the things that have popped in my head for tonight's posting:

My brother and his wife came down this weekend to give my Mom and early birthday. Carla and Emily made a confetti cake for my mom, and Emily made the cake for lunch (a rum cake), so she has been quite the baker lately! She loved it! The cakes were great! Moist, good flavor, excellent! I dare Bobby Flay to have a throwdown with my five-year old!

While they were here, my brother and I sat down for a few rounds of SingStar. Shan says my brother and I have the same sound when we sing falsetto. In fact, she said there were times you couldn't tell if there were two voices or one. Now, if we were any GOOD, that would be one thing. We sound the same, and we both suck the same. Shan said the difference in vocals was very evident when we sang in our "regular" voices. Brian kicked butt on "Tricky" and "Respect" - he must have more soul than I have! LOL! After we were done, and Brian had gone home (it was about 1am), Shan got on there and she grabbed the Number 1 spot on several songs.

So, there's a rock, yes a rock, that has been around since the 1800's. People have carved on it, painted on it, whatever. A flood comes along and washes it away. A man decides to hunt it down in order for kids to write about it. He finds it, and sparks a war of sorts. See, he is in Ohio, and Kentuckyians claim it is THEIR rock. Ohioans say it is THEIRS. Each state's TAX dollars are being spent in order to take the matter to the Supreme Court. Seriously. Over a rock. How much government money is being wasted on this? Want to cut back on the deficit? Throw out stupid lawsuits. Or wait, maybe I need to find a rock... Or maybe I need to figure out how to get on the "do not grow" list so I can paid NOT to grow crops... Stupid.

Speaking of stupid, I think the government regulation of the banking industry is stupid. Look, people got screwed by the whole adjustable mortgage rate. We never switched to an AdPR because I was not so dumb to think things could not go sour. DUH! That's part of the risk you take when you undertake something like that. Okay, so then we have banks who made high-risk investments and now the government stepped in to save everything. BZZT! Wrong answer. People only seem to want an OPEN, FREE market when life is rosy. When the bubble bursts, they go crying to Mommy. Stupid. Nature has a way of weeding out the bad things or the things that need to be weeded out. Let the banks fail that do stupid things. What incentive is there for any banks to play by the rules, if the government is just going to rescue them anyway!? Heck, for that matter, the same holds true for airlines. Why should the government bail out airlines because they screw up?? Hey, I am up to my arse in debt, I want a government bail out, too! 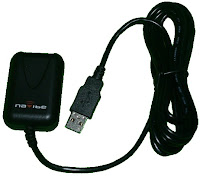 A week or so ago, I ordered a USB GPS unit to plug into my EeePC. It came in on Friday, and I hooked it up to my Windows machine to test it out. Shan and I hopped in the truck and "made the block" while the GPS unit updated our location. I know, people have been doing this for some time now, but it was very cool! So, Sunday, I hooked the unit up to the EeePC, followed the steps on running the GPS unit from the EeePC WIKI, and POOF, I had a 7-inch LCD running GPS! Excellent! And, the software is free since the EeePC is running Linux (okay, so the GPS software is also free for Windows, too).

I am "In The Tribe!" The Indians started a new Fan Forum thing this year, and I joined earlier on Sunday. One of the perks is that I get MLB GameDay as part of the package, so I get to listen to Tribe games live online (at least I think that's what I get - LOL). I also get other perks, but it'll be cool to be able to have the game playing in the background at work or when I am at the house and can't watch the game on TV.

I have been selling off most of my eTopps collection on eBay. I have two portfolios, and one has been sitting stagnant for about a year. I figured I just as well let someone else enjoy the "cards" and make some money in the process, right? So, I am selling off those cards and dropping the cash in the bank. eTopps is a very cool way to collect, but because I only (okay, mainly) collect Indians cards, it is not really "for" me. I can buy the Indians cards after the initial offering, usually cheaper than the IPO price... Will I dump ALL my eTopps? Who knows...

I got an update about John's Mom - she had the surgery and was recovering fine. I'll post an update when I have more specifics...