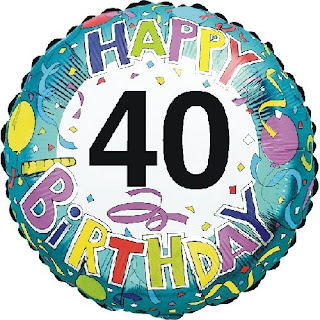 Before I get started with my '40 memories" post, I woke up this morning to help Shan get some things scanned in for her and other teachers. She wished me a Happy Birthday and we got to scanning. When I got the kids up, they both told me Happy Birthday, too.

I don't normally listen to the radio when I drive - I prefer to listen to the iPod through the FM transmitter deal in my truck. But, I didn't feel like messing with all that this morning, and I had the local station playing. When they announced birthdays, my name was mentioned from the fine folks at the education co-op where I work. I thought it was very nice.

At the end of the birthday list, they draw a name to win a prize, and they drew my name! How cool is that!? My prize? a $5 gift certificate for the Western Sizzlin in Hope. I have mixed feelings about this. I'm happy I won, and I even scored a free meal out of the deal. Or did I? Actually, no. See, the meals are $6.99 and up. Yes, I realize I get my meal for $1.99+tax, but it still strikes me a bit sideways. I mean, why not give away a free meal, say up to $8 or something? The other issue is that we don't eat at Western Sizzlin. Frankly, it just hasn't been that good. We've one a time or two, mainly to see if things had gotten any better. They had a fire there a while back, and we have not been there since the remodeling (and I think they even have new ownership, if memory serves). I suppose this is a good excuse to go. So, later today, I'll run by the radio station to pick up my certificate.

The last time I won anything from a radio station, I was working in Northern Virginia for a computer retail/consulting company and happened to have the station tuned to 105.1. This scraggly, drunk-looking guy in a Santa suit walks in and before I could call security, he says, "Are you listening to 105?" I have no idea if that's what I'm listening to or not, I'm trying to decide if I need to deck the halls with you, buddy. He listens intently to the radio in the store and then to the headphones on his ears. I reach for the phone. He says, "You are a winner! You just won $105 dollars from Super105 (or whatever it was)!" I remember looking at him like he really was drunk, asking, "Really?" He reached into his 'bag' and pulled out a card, a media release form, and a cell phone. He called the station and sure enough, I had won. A few weeks later, I had a check for $105 in my hands. I bought a Garrard 6-disc CD changer. That was a big deal in 1986. We still have the thing, though one of the trays no longer works. Not bad for a piece of electronics that is more than 20 years old.

So, as I said, later today, I'll go pick up my gift certificate. Ironically, the station that I won it from is also 105, though it's 104.9... I sense a disturbance in the Force.

In honor of my 40th birthday, I thought it would be fun to list 40 things I remember. These will not be in any order, other than the order in which they popped into my head - though I will try to start with my earliest memories and work forward. Honestly, I'm not even sure I'll make it to 40 things with the way my mind works... And, I'll probably have to get Mom to fill in the blanks. Some may be funny, some painful, but they are the first 40 things that have come to mind: