Catching up on Popping

You know, now that I have a HTC Touch Pro, I can easily record my thoughts on the built-in voice recorder. Luckily for those around me, I am the only one who actually LISTENS to the things I record while driving down the road.

I was in radio for several years, and if the pay was good and I didn't have to do any special appearances, I'd consider taking it up again. Not full time, mind you. I couldn't stand to be away from the techie stuff I like to do so much. Hand me a mic, and I'm ready to spin some wax, er plastic (CDs), or really, heck DJ's don't even do that now. What do you call it when you touch the screen and play the next digital copy of "Stairway to Heaven" or "Except for Monday" or whatever song is next on the playlist? Of course my favorite part was getting on the air and spouting out whatever randomness came to mind. I wouldn't do it too often back in those days - I was a newly married college student and I was not taking chances with making the station owner mad at me. Boy, have I changed. Just ask my boss these days. LOL!

One of the things on my voice recorder has to do with Corvette songs. See, as I was driving down the road, changing the station at just about every mile marker (I think I have AADD - Auditory Attention Deficit Disorder), I came across "Private Malone." As I listened to the whole song (I love that song), I began to think of other Corvette-related songs. Come on, I bet you can name at least TWO other Corvette songs.... I'll give you a hint - one is a country song and the other is by a guy who can't seem to make up his mind as to what his name should be (no, not John Cougar Melloncamp).

So, you got those, right? "The Corvette Song" from George Jones, and "Little Red Corvette" from Prince (or whatever he uses these days).

When I got home, I did a quick Google search for "Corvette songs" and my jaw dropped. One of the very first pages to come up was Walfred's Corvette and Chevy Songs page. Holy cow! There are at least FORTY songs that either mention or are specifically about Corvettes! In case his page ever disappears, I am including the list below. It has the artist listed after the song title. The page also includes a sample of most songs, plus lyrics or other info for many of them, too. I'm glad I did not decide to embark on this venture myself. I am pretty sure I would have never come up with this many. And, really, his list stops around 2005 or 2007, so I'm sure other 'Vette songs have come out during that time. One that comes to mind is "Blue" by Eiffel 65 ("Blue his house, With the blue little window, And a blue corvette, And everything is blue for him...").

Speaking of "Blue," have you ever listened to the lyrics? The chorus goes something like:

Have you heard the song from "The Presidents of the United States of America" (or by "Busted" who is/was doing the same song) called "Peaches?" Well, while flipping channels in the truck, this stupid song came on. Seriously, the whole song is about a guy and his peaches. I'm sure there is a double meaning in there, but on the surface, this has to be one of the dumbest songs I have ever heard. I know there are a lot of dumb songs that have been made throughout the annals of time, but this should be high on the list. I figured I'd put the lyrics here, just so you can read along and see what I'm talking about:

I took a little nap where the roots all twist
Squished your rotten peach in my fist
And dreamed about you, woman
I poked my finger down inside
Make a little room for an ant to hide
Nature's candy in my hand or can or pie

Oh, and in case you're wondering... In the birthday video we did for my Mom, Shan's Dad calls my Mom "Bob" and he's gotten Kensley to call her that, so that's where the whole "Where's Bob" thing comes in to play. You'd have to understand the back-and-forth that goes on between those two... It makes your head shake in disbelief involuntarily. 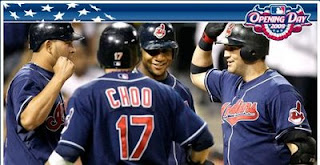 Somehow I missed the Cleveland Indians on the MLB channel's "30 clubs in 30 days." I never could find it in the guide to set it to record, and even now, searches come up empty. Maybe someone posted it to YouTube and I can find it there. In the meantime, Opening day starts MONDAY!! WAHOO!!

Oh, I almost forgot! I tried to cut my wedding ring off today and NO luck doing. See, as hard as it is to believe, I have gained just a little weight since Shan and I got married almost 18 years ago. Now, I did have my ring resized once, but even that was about 10 years ago.

The other day, Shan mentioned that I needed to get my ring resized. I have been putting it off because I plan on getting off my butt and losing weight, so I wouldn't need to get it sized. Well, my finger has been swelling up over the past few...let's say months... Today, I could not pull it off. I tried cutting it, but all I did was mar it in a couple places (and nearly cut my finger off in the process). I decided to bite the bullet and put some dish soap on my finger.

I twisted, pulled, and grimaced my way through it, but eventually the ring came off. I don't think I could have done it at all had I waited much longer. even now, my finger has a severe indentation where my ring used to be. I'm hoping to meet up with a local guy that does resizing soon. I have to say that not having my ring on has always bothered my hand, even during other times when I didn't have it on. It is more than a feeling of 'being naked without it.' It's more like not having a piece of me attached anymore.

I hope I can get it fixed quick and get it back even quicker... I also have to figure out what ring size I even wear now... That's a number I'm sure I won't be happy to see.