You know, coming up with catchy one-liners for blog post title is not really my forte'. Of course, if you're reading this at all, then you are more than well aware of THAT fact! Today's title had nothing to do with anything. It quite literally popped in my head as I sat here trying to think up a catchy title. Of course, I wonder how much the title of a post really matters to most folks. I have no idea (No-eye deer). I know that when I read the blogs I frequent, a certain title does not make me want to read the post itself any more or less than another title. I enjoy the person's posting, regardless of the titles used to describe (or not) the various posts. In fact, some people don't even bother to title their posts at all. I'm not a big fan of going that route, but to each his own, right?

I remember I applied for a job once with the Capitol Building in Little Rock. Now, this was MANY moons ago when I was young and stupid. Now, I'm not so young. Verdict is still out on the stupid part sometimes. Anyway, one of the application tasks was to read an article that was to be a press release and then come up with a catchy headline for it. I'm not sure if my headline is what cost me the job or my brutal honesty during the interview. That came in the form of the following:

Employer: What would you say is your biggest weakness?

Me: I'd say that sometimes I don't finish a project that I've started. I finish most of them, but sometimes I quit during the process and never get back around to finishing the job.

As I said, young and stupid. As for the catchy headline, I have no idea what I wrote.

Today, I helped a middle school principal learn how to create audio files to be shared on the school's website. We're calling it 'podcasting,' but it's not really podcasting in the true sense of the word. We're not creating a feed for it, but rather posting the audio for parents, teachers, etc to pull up the daily announcements. It turned out that the school had some Sansa m250 MP3 players that also record voice. So, we had a student record the announcements on that, then hooked it up to the principal's computer and opened the audio file in Audacity. Audacity is a free sound editor, and I love it. It is very easy to use. Once that was done, we save the file as an MP3 to the web server, and tah-dah!

The principal was VERY happy with the whole process and the quality of the recording. She now wants to record a weekly or monthly message to the parents and students as well!

One of the many reasons I love what I do for a living. 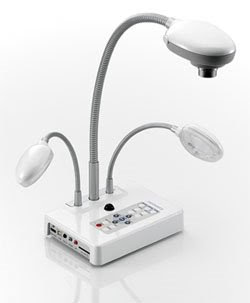 When I got to the office after the training, I had a package. It was a new document camera - Lumens DC 260! This thing is SUH-WEET! You hook it up to your computer (or to a TV or projector) and anything under the lens will show up. That's normal for a document camera. The WOW comes in with features like the ability to RECORD what you're doing! You can also connect it to a microscope! So, if you happen to be looking at amoebas moving around under the microscope, you can not only show it on your smartboard, but you can record it and post it to the classroom web/blog/wiki! Oh, and you can connect a microphone, so you can do live play-by-play and/or commentary on what is being shown and recorded! Want more? Okay, how about a feature that lets you use it as a webcam over Skype? Yeap, you can show whatever you put under the camera across thee internet to someone else using Skype! It really is amazing. We haven't hooked it up yet, but that is one of my assignments this week!

This next part is a partial 'steal' from my baseball card blog. To help set up the backstory, a fellow card-collecting blogger sent me a box in the mail.

Inside the box, on top of the contents was a folded, hand-written note. The note began, "Hey Pal!" In my book, that is one of the greatest expressions ever formulated. Indulge me for a moment if you will. As a kid, my Grandfather on my Mother's side always greeted me with that exact phrase. It didn't matter if we had just seen each other the day before or if it had been more than a month. He used that phrase with each of his grandsons (and great-grandson (my son), too). As we got older and moved off, anytime we talked on the phone or went back to visit, it was always the same greeting: "Hey, Pal!" As far as I'm concerned, the box could have been empty save for those opening lines. There is no way Motherscratcher would have known that and I realize most folks are probably shaking their heads right now, but I appreciate the sentiment - for many reasons.