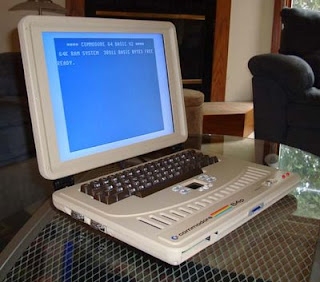 What you see above is one of the coolest things I have ever seen done with a Commodore 64. Yes, you remember those, right? Well, if you grew up in and around the 80's, you probably do. Well, Ben took a Commodore 64 (technically it's a C-64C) and built a custom-made laptop out of it with an LCD screen. The whole story is here. And, I have to say, it is a stroke of genius and beauty as a kid who not only owned a Commodore 64, but who grew up and got into the technology field because of it. At one point, I even had a 'custom' Commodore 64 that I labeled the "XTC" because it was housed in an old IBM-XT case. It was ugly. Ben's finished project is a true testament to the computer that changed 'personal computing' in the 80's. Oh, I know, a lot of folks say it was IBM and their "PC jr" that did it, but I say "nay-nay" (heh-heh). The C-64 made personal computing AFFORDABLE in the 80's.

The influence of that computer is so great that Nintendo recently announced that the Commodore 64 will be available for download on the Wii's virtual console. Frankly, I'm puzzled by that whole thing, but hey if it brings a new generation of kids along for the ride, why not? Of course, I'm sure it's aimed at the parents who had a Commodore as a kid. that, of course begs the question: Why not just go to www.c64.com and download nearly everything made for the Commodore 64 on your own computer? I don't have an answer for that. Frankly, I'd rather play C64 on my PC than on my Wii...

Now, I have also seen people go in the OPPOSITE direction: 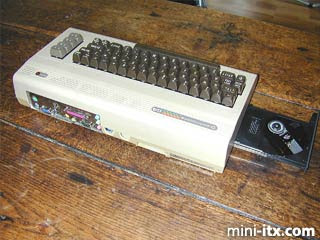 What you see above is a Commodore 64 that is now a modern-day PC. The guts were stripped out, and a very small system board (called mini-itx) was used on the inside, along with a CD drive and more. So, here is a computer you could use right now, running Windows XP, dressed up in a Commodore 64 casing. Brilliant!

Amazingly, people are still very interested in what the Commodore 64 could do in the past, and what it can still do today. While poking around for material to be included in this post, I came across a live web server being hosted ON a working Commodore 64 computer:

The web site has an entry page (found here) that lets you know if the C-64 is up and running at the time. But, once you're in, you are sitting on a website hosted on a Commodore 64 that first showed up in 1982! I find that remarkable, and an enduring testament to just how well the main units were put together.

Now, i did say "main units" here. Having owned several Commodore 64's throughout my younger days, I can attest to the horrid power supplies those things came with. in fact, at one point (this is when I was living in Virginia), I hunted down a company that manufactured power supplies for the C-64 and bought two on the spot. One of those ended up in my custom XTC in fact. And, if you read the laptop article, you'll notice Ben opts for a GameCube power supply himself. That says a lot right there!

The original computer ran at 1Mhz. that's 1 Megahertz. A Megahertz is the number of cycles per second a computer can perform tasks. By comparison, today's mini netbooks (like the EeePC) run at approximately 2.2 Ghz (that GIGAhertz). Most 'regular' computers these days run at 3+ Ghz and often sport more than one processor handling things. But, for the sake of argument, let's stick with the 2.2Ghz EeePC. This little laptop is 2.2 THOUSAND TIMES faster than the Commodore 64 was! 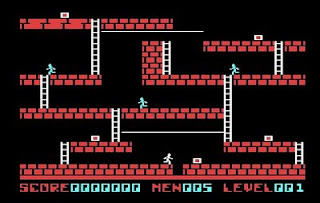 I also came across the Jac64 project, which lets you play certain Commodore 64 games in your web browser! Holy Crap! Here is the list of games. What's great about this project? You don't have to download anything special, other than Java! And, most folks have Java anyway, so there ya go! The controls can be alittle hard to get used to, but I had a blast playing the old "Lode Runner" game for a bit (once I figured out how to move!).

What's cool about the emulators today is that most of them allow you to bump the speed of the C-64 up to hundreds of times faster than the original. An emulator is a program that 'pretends' (hence, emulates) to be the original device. I've talked about this before somewhat in relation to my own kids 'discovering' certain games and programs that were out on the Commodore 64, but still create enjoyable playtime (such as "Little Computer People" and "M.U.L.E.") today. Frankly, no one wants to wait while the slow Commodore loads up a game - heck we didn't even want to wait back then! So, like I said, most emulators let you speed things up (and then slow then back down, too).

So, if you're feeling a bit nostalgic, check out the links I posted and each of those sites will lead you further down the road to checking out what serves as the foundation for many of the computer geeks, er gurus, you know and love today...
on April 27, 2009