If you thought Michael Jackson was already plastic...

HotToys, a company in Japan, plans the upcoming release of several new Michael Jackson-related toys. Yes, I'll let you read that again. Take a moment for that to sink in. It's not really sinking in? Well, does this help: 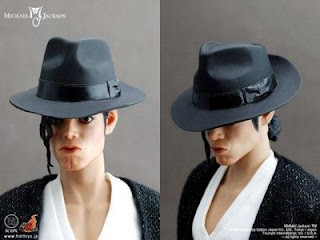 No, those are not photos taken by the Paparazzi. Those are photos directly from the manufacturer's web site. The look of Michael during his most popular years as a performer is uncanny. The doll/collectible is completely poseable. HotToys makes some of the most articulated figures I have ever seen and they have licences for all kinds of movies, etc. They also have a James Dean (red jacket) version of a doll/collectible, but no one seemed to have wigged out when they released it. Do a search for "Hot Toys Michael Jackson," and you will see all kinds of people asking all kinds of questions.

The only thing I can figure is that the doll commemorates Jackson's recent 50th birthday. But, there is more to this doll than meets the hand, er, eye: 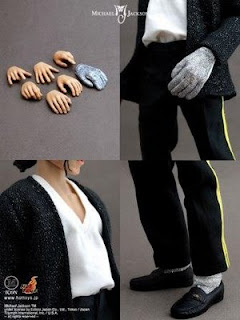 Yes, you received ALL of those hands with the "Build-a-Jackson" kit. Now, I know there has been somewhat of a sarcastic tone to this post, but I am a HUGE Jacko fan. Not of him personally, but of his entertainment, singing, performance. Yeah, he's got some seriously deep-seeded issues, but he man can dance and sing like very few people before him. Period. One question that I have seen all over the web is "Why so many hands. It's creepy." Well, yeah, in a way, it is. But, since the company is not up to articulating the actual fingers, collector's and fans know that Jackson has a different stance for almost everything he does. Honestly, I don't see this as any weirder than all the feet and hands you get with Bratz or the latest incarnation of Polly Pocket. (I know these things because I have a 6-year old daughter, and it is a Daddy's job to know.)

So, while it may seem creepy to non-fans, I think the target audience for this is going to love being able to swap out looks. I am most impressed with the ability to replicate some of his classic 'moves:' 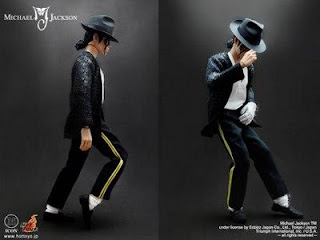 How many dolls do you know that can pull off the "Jackson lean?" Yeah, okay, you're asking yourself, "How many people would WANT their doll to pull it off?" I'll give you that one. 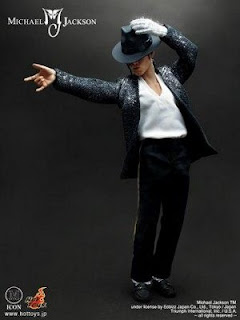 But, this doll is NOT the only Jackson-licensed thing Hot Toys is developing (or has developed, it's hard to tell because, well, I don't read Japanese): 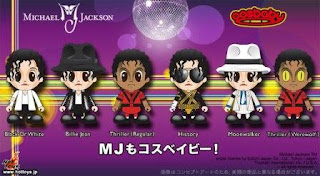 The articulated collectible has rumors of being available before Christmas this year, though I have seen a release date of February 2009. If they were smart, they'd grab the Christmas rush (assuming there actually is one). I have no idea if the mini-dolls are already out or upcoming.

Shan and I spent the day shopping on Saturday. At one point, I overheard the following conversation:

Mother (presumably to son, growling in exasperation): "RRGH... Your mother is NOT doing well. I've had no luck in finding what I'm looking for."
Son: "Well, then can we look at toys?"

I love how kids' minds work.

There were two girls working the counter. No, there was one girl working the counter while the other tried miserably to make waffle cones. The smell of burnt waffle filled the air and grew progressively worse as we sat there eating. If they were trying to get customers to AVOID the place, they were doing a good job.

There were two separate conversations that took place during our stay. The first went something like this:

Girl1: "I keep messing these (waffle cones) up!"
Girl2: "You'll get the hang of it."
Girl1 (watching Girl1): "How can you do that like that?"Girl2 (mixing our orders up in cups because despite the NAME of the place, there is no actual STONE in the mall version): "I learned how to do this at events. I've been doing this for two years. Trust me, in two years, you learn how to do a lot of things. It's no big deal for me now. If you're here for two years, you'll know how to do it like this, too."

I didn't know if she was implying Girl1 would move on to (presumably) better things, or if Girl1 wouldn't LAST long enough to be around for two years...

Girl1 (coming out from the back area, smiling and excited): "Yes! My Mom said she didn't care WHAT time I came home tonight, just so I was home in time to go to church in the morning."
Girl2: "Well, that should be interesting."

Girl1 said something else, but I don't remember what it was. This conversation struck Shan and me very funny. Here, this girl was excited about the prospect of staying out late (presumably all night), and all her mother was worried about was whether or not the girl was going to be home in time for church. Now, I admit, we did not hear the conversation Girl1 had with her mother, so it is very possible that she told her mother where she was going and who she'd be with. Then again, I may be old-fashioned and kids today just don't bother with such trivial things. I can tell you MINE will deal them, or they will deal with ME...

Shan told me about a conversation she heard between two young adult/teenaged girls that went something like:

There were a few tidbits in there that I forgot, but you get the gist... Today's kids (okay, that's too broad, so I'll say MANY) have NO CLUE what the cost of living is, nor do they understand that their first jobs are most likely going to be lower-paying. Now, on the other hand, depending on the student and the field of choice, kids could walk out of High School with varying technology certifications and land themselves mid-to-high five figure salaries without so much as setting foot in the doorway of a college (either in-person or online)!

Still, from Shan's retelling of the conversation, I was pretty sure there were ceiling fans in the store that were moving without the aid of electricity above the girl's head...

For those of you asking yourself, "How did Dave even find out about those Michael Jackson things?" Here is how my IADD (Internet-based Attention Deficit Disorder) works:

Shan and I were shopping for Christmas presents yesterday. We saw a Hannah Montana Malibu House. I made the comment that they should make Jackson dolls. For those not privy, Jackson is Hannah's brother on the show. I made a comment that I would have to look that up online. So........ I wake up this morning to post on my Indians blog. I scan in the cards I received in the mail (along with the crayon-written note). Before I get to posting, I remember to look up the Hannah Montana Jackson doll information. One of the first things that pops up is a 'news' item regarding the Michael Jackson doll. That, of course, led to the post you read earlier. See? It all comes around eventually. Well, sometimes anyway.