Sometimes, weird things just pop into my head. No, I mean WEIRD things... On the way to work today, for no reason I can think of, I thought of Farkleberry Tarts. I know, weird right? I mean, I haven't heard of those for YEARS, let alone even thought about them... Then, suddenly, there they were. Now, I realize that 99% of the population of the world has no flippin clue what I'm talkin' about. Well, you see, back in or around the holiday season of 1971 in Pittsburgh, a radio host made an off comment about sending him some Farkleberry Tarts. From then on, it became both a tradition and an inside joke in the three-rivers area. Yes, there really is a thing called a Farkleberry that grows all over the southeastern US, and yes, people really do make desserts using the berries. But it was one of those things where the word was so bizarre that it took on its own life.

Now, be ready for another mind-blowing trip through the IADD world of my 'net-surfing prowess: On one of the blogs I read (Thorzul), the author posted a picture of a sticker he owned as a child. He asked if anyone knew what it meant or what it was. It was/is some Japanese writing. I had some time to kill at work (don't tell my boss... Oh, heck, go ahead and tell her), and so began my research. While researching this pair of Japanese symbols, I somehow managed to stumble on a Pittsburghese web site that listed all kinds of words I used to say while growing up! It was great! Well, f course, I started checking into Farkleberries, which led me to look into Monkey Brains. No, not REAL ones, but these:
List some words you found and talk about them... 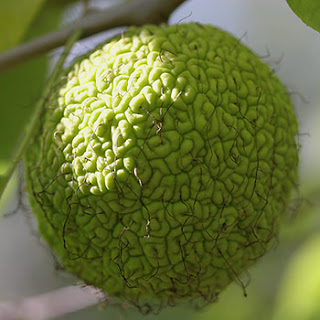 This is actually often referred to as an Osage Orange. For obvious reasons, my brother and I called them "Monkey Brains."

I know what you're asking yourself: How does this guy go from researching Japanese symbols to monkey-brain-looking fruit!? I'm tellin' ya, it's a scary world between my ears.... Okay, so my brother and I would play at some park. The only thing I remember about the park is that it had a creek that had stone walls on either side of it for the most part, though there were lots of places that there was no wall. Growing along this creek were trees that beared this fruit. We were young and clueless, afraid to touch the 'monkey brains,' so we would kick them into the creek, while at the same time, try to get the other person to 'accidentally' touch it by kicking the fruit AT the other person... We liked to torture each other that way. I don't remember how we finally figured out that the 'monkey brains' were not only NOT brains, but that we could actually pick them up with no side effects whatsoever.

And now you're thinking, "So what was the Japanese symbol!? What did it mean!? Why does that guy call himself "Thorzul" anyway!?" Okay, maybe not the last one... Well, it turns out Thorzul always referred to his sticker as his "Karate Kid" sticker because it was, after all, Japanese, and that was the hot movie at time he found it (er, bought it). He knew more than he realized:

This is the symbol for "10,000 Ages." Okay... Well, that means something along the lines of "a long life" which, in turn is "Hurrah!" or ..... BANZAI! And, if you've ever had the occasion to watch the movie, you know that "BANZAI!" is yelled a lot throughout the movie. A LOT throughout the movie...

Ah, and so now you may be asking yourself one of two things: 1) What am I doing still reading this guy's crazy posts? or 2) So, what were some of the words from Pittsburgh and where do I find more?

If you are stuck at #1, there is very little I can do for you. I'm sorry, but you are going to die... Don't freak out about it. We all die eventually... I didn't say it would happen right now, or next week or anything... Yeesh...

I realize that I referred to many of those phrases in the past tense. The truth is, that is exactly how 'Burghers talk today. Shan says that when we go back to visit, it is not very long before I pick up my old accent and the phrases I grew up with... After reading over just a few, can you blame me?? :-)

Here is the site I found... Feel free to read all kinds of words from the 'burgh:
Werds from the 'Burgh: here