Tech Support, Teaching, A Class Reunion, and Fun in the Sun

So this is what happens when I take a few days off from updating things - I suddenly find myself with four days' worth of posts all wrapped into one.  Such is the life of an inconsistent, jack-of-many-trades blogger.

Before I get into everything, I want to thank those of you that have taken the plunge and bought a copy of my book (or who have expressed interest in picking up a copy).  I really appreciate it more than I can express, but I'll try anyway because it means that much.  The stories in the book  - ("All This Digging" - see the image over there on the right?  Feel free to click on it. (Yeah, shameless plug, what I can say?) Feel free to check out  the preview.) - are much like most of my posts: not necessarily connected to each other, and not quite like reading the same thing twice.  I know it's hard to get a feel for what to expect when presented with a short excerpt of one story, and because of a suggestion from a fellow techie, I expanded the preview on LuLu.com to show you a taste of several different stories.  I have to admit, it is still weird when someone comes up to me and says, "Hey, I bought (or "am going to buy") your book..."  It is very humbling knowing how many friends, family, and other supporters are out there reading what *I* wrote.  Thank you all very much!  I also want you to feel free to review, critique, etc the book and let me know about it - good, bad, or ugly.  And if you review it online, send me the link and I'll post it (or if you send me the review with permission to reproduce it as a post, I can do that too!) on here.  Just another way for me to say "Thanks."

I know that not all the stories in the collection are going to appeal to everyone.  Some readers may find the story "All This Digging" a little too dark while finding "Forgiven" a little too "preachy."  Frankly, that's one of the things I liked about putting the collection together in the first place - (to borrow from the theme song) different strokes for different folks.  I also know that "short stories" and "short short stories" are not widely read these days.  So, I deeply appreciate those of you that are even THINKING of picking up the book.


I received a call the other day from someone needing help with their computer.  The computer was "extremely loud" after a few minutes of use, plus it would lock up or reboot at random times.  In techie terms, it sounded to me like this computer was overheating.  Those symptoms are textbook for a system that has too much dust, dirt, and other gunk inside the case.  So, I told the person to bring then computer to my place and I'd look at it.  I hooked it up, turned it on, and sure enough the thing started screaming within a few minutes.  I disconnected the wires and opened the case.  Inside, a coating of dust, dirt, and something I could not quite identify, covered everything.  I took the canned air and blew out what I could.  Unfortunately, the "gunk" would not come off easily.  The thick, black, fuzzy substance stuck to chips, the main CPU fan, and just about everything else inside the computer.  Using cotton swabs, paper towels, and the canner air, I was able to get things back in operation.

Afterward, the person said, "That was probably nicotine, huh?"  I said that it could have been a combination of that and dust in general.  But, that person knew the right thing - cigarettes are one of a computer's worst enemies.  Have you seen the images of what smoking does to one's lungs?  Well, it does the same thing to your electronics - computers, cell phones, TV's, stereo equipment, iPods, you name it.

So, how do you clean out your computer?  Ideally, leave it to someone that knows what they are doing.  Short of that, though, most computers have either a latch that keeps the cover on or a couple screws in the back along the edge that keeps the cover in place.  Once the screws are removed on one side of the computer, the side of the case should slide open.  Once the side is removed, you can use a can of compressed air to blow out the dust bunnies living inside.  I recommend you do this OUTSIDE of your house. :-)  Two things you NEVER want to use inside your computer: water and a vacuum cleaner.

Seriously. Do NOT spray water into your computer trying to clean it.  Water will cause everything (or at least enough things) to short out.  We are talking electronics here!  Some of you may be laughing right now, but I have been asked PERSONALLY by someone who wanted to just "wash out" their computer.  Please, do NOT use water - no matter how gunked up things are!

Vacuum cleaners are also a no-no!  Why?  Because when you run the vacuum, it builds up a HUGE amount of static electricity.  Well, if you take that static electricity and touch sensitive electronic parts and that static discharges, it can fry those sensitive electronics inside your computer!  They do make "electronics-friendly" vacuums, though, so you could buy one of those at Best Buy or online if you want to.

But, as I said when I started this, ideally you should leave cleaning the inside of your computer up to someone you trust to service your computer.  Just don't be fooled into playing a lot for it, though.  Seriously, no more than 20 bucks for a thorough cleaning.


On Saturday, I worked with 28 teachers.  They learned about project-based learning and how to incororpate "PBL" in their classrooms.  The teachers are part of a program in Arkansas in which people with degrees outside of education can become licensed teachers.  Honestly, I don't know why anyone would do such a thing, but then again, I do not have whatever teachers have inside them that makes them want to spend all day with a roomful of kids.  I have two kids.  I can barely handle that.  I digress.

One of the participants had been recently badly, BADLY burned in an accident.  She got one of her friends to hook up a video camera and we used Skype (http://www.skype.com/) so that she could attend from her house!  It was very cool.  The people in the class got a kick out of it, and everyone had a chance to talk to the recovering teacher.  After each teacher gave an update about their classroom, the Skped-in participant was able to share her updates.  It was a hands-on demonstration of using technology in order to keep homebound individuals connected to the classroom.  Think "pandemic."

What is "project-based learning?"  Ah, that is something I'll share in another post.  Of course, a simple web search will net you a LOT of information about such things.  But, I will be sharing more about it in an upcoming post.


While I was teaching on Saturday, Shan and her classmates held their 20th anniversary class reunion picnic at White Oak Lake.  Shan said they had a lot of fun.  Emily and Tyler (along with other kids) rented pedal boats and tooled around the lake.  The picnic was a chance for classmates to catch up, hang out, and have fun.

Saturday evening, there was a supper/dance held and a lot of people showed up for that.  Shan figured up about half the class had come and many had brought someone with them.  It was a good crowd there with a DJ.  Now, I like my music loud.  I love jamming out and sharing it with the world.  BUT, this guy was playing in a gym-sized room with cinder block walls.  He was also plahinng louder than I have heard from some concerts I've been to.  It is way too loud when you can't even shout at the person next to you and have them hear you.  Keith (a friend) thought ahead and brought ear plugs.  I will be sure that ear plugs will be in my equipment list for the 25th reunion. :-)

Aside from that, though, it was fun watching everyone dance and have a good time! 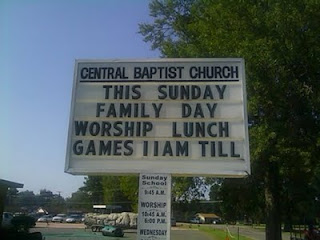 Speaking of a good time, our church held "Family Day" today (Sunday)!  The deacons and their wives (and I assume some other folks as well) got together and had a cookout with hot dogs and burgers, plus chili and "fixins" which was followed up with all kinds of desserts (pies, cakes, brownies, things I didnt know what they were but I ate them anyway!). 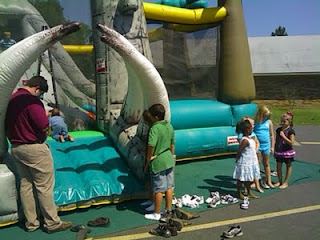 In the parking lot, they had two LARGE air-filled jumpies - one was a mega slide and the other was Jurassic Adventure.  If that wasn't enough, they also brought in a rock wall for the kids to play on!  It was a lot of fun!  Emily played on the Jurassic Adventure and tried to help Kensley play, but I think Kensley was a bit too small for all the jumping around going on there. She didn't take long to decide to get off, but Emily stayed and played.  Then Emily went up on the big slide.
on September 27, 2009

Email ThisBlogThis!Share to TwitterShare to FacebookShare to Pinterest
Labels: popped in my head, random thoughts