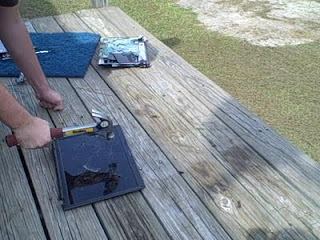 Tyler told me that his laptop wouldn't come on. He had used it earlier this morning, but by this afternoon, it would not come on. I picked it up and it was pretty hot. I tried to turn it on, but when I pressed the power button, I got nothing at all. No lights at all. That is rare for a laptop. Usually, you get a flash or at least some indication of power. Nothing.

I removed the battery and tried only with the ac adapter. Nothing. I let it cool off. Nothing.

I fired up my laptop and went to the HP site to chat with tech support. I explained the problem and he had me do a 'static electricity drain' which I had not heard of. basically, I removed the battery, unplugged the ac adapter and held the power button for a little more than 60 seconds. After that, I put the battery back in and plugged it in to the adapter. I pushed the power button, and ... nothing.

The tech asked me to hook the laptop up to an external monitor. Why? I have no idea - THERE WAS NO POWER! anyway, I did it for the sake of argument. Nothing. Well, the monitor did recognize the fact that it had something plugged in, but the laptop did not come on, of course. Hooking it up to a monitor has nothing to do with power. Seriously, where do they find these people and/or who writes their tech scripts??

so, Tyler and I did the only thing we could at this point: deconstruction. Now, in the name of fairness and honesty, I took very care measures to make sure everything I did could be reassembled. I did this in case something actually triggered a fix. Naturally, nothing I did was going to fix this. The simple fact is that the boy burned up his laptop. See, when he closed the lid, he had it set to blank the screen but left the machine running. BIG MISTAKE. He then set the laptop in a comfy chair, restricting the air flow. BIG MISTAKE. Now, if he had been told a hundred times about shutting down his laptop when not in use, it would be one thing. But, I warned him about not shutting it down. Yes, he is 14, but some things have to be learned the hard way I guess.

I pulled the hard drive and the memory. i figure I can salvage the data off the drive with equipment I have at work.

so, after we got to the point we knew the laptop was beyond repair, I took it apart completely and let Tyler vent his frustrations by hammering the thing to pieces. Emily recorded it on video and I'm sure it will be edited and posted on YouTube.

So, now he is laptop-less, and will have to use the desktop we have in the home office (the kids have one in that room they can use). He'll have to save his pennies for a new one. I told Shan, "I paid for part of the first laptop. I will not pay for part of a second one." 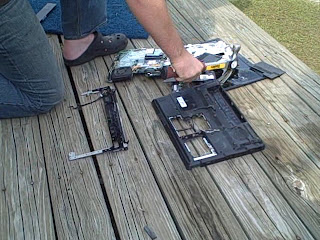