Daily Photo (Not quite the MacKenzie's) 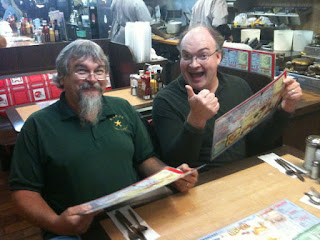 Bob and Dave at the Waffle House in Conway, AR on Oak St.

In early December, 2009, Bob (aka Coke1 on Plurk) and I met up with Kevin Honeycutt (aka, well, KevinHoneycutt on Plurk) at a Waffle House near our respective hotels.  The picture was taken by Kevin.  After the meal, Kevin invited us back to his room for an impromptu iPod/Guitar jam session.  That somehow led to Bob and I being invited to play on stage the next day in front of a crowd of school techs, media specialists, and others from around Arkansas.

While Kevin played his guitar, Bob and I each used an iPod Touch and the "Band" app for accompaniment with some 12-bar blues and drumming.  We had a great time, which I know you would never guess from the picture above.