Back to Work, People!

Welcome to the first Monday at work of 2010. For many in the state of Arkansas, the winter break was extended by a snowfall that shut down many school and business north of the Little Rock area. For those of us living below the Saline County line, however, it was time to brave the cold, dodge snowflakes, and get to work.

I started the day at the office by setting up my boss's new computer, which came with Windows 7 Professional installed. She is the first at our place to have Windows 7 as a primary OS, so it will be interesting to see how things go. Having played with it a little and getting her set up, I have to say, I am ready for the change. Win7 has some neat features like Live Preview (which shows you live screenshots of running programs, like an installation running behind other windows for example). The system also automatically detected and installed her printer which blew me away compared to the nightmare that was Vista.

Once that was out of the way, I began revamping the co-op's web site (http://etsp.k12.ar.us). It still has work to be done, but it is getting more color, actual photos, and will eventually be more user-friendly (er, I hope anyway). We are also changing our corporate logo and the samples I've seen (being done in-house by Gina, one of our Teach Center workers) are lookin' good. I can't wait for us to choose one and move forward into the next phase of what SWAEC will bring to the schools of Southwest Arkansas! 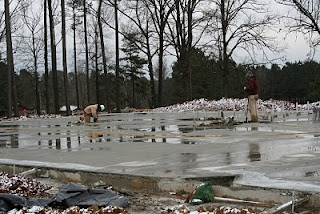 Speaking of the site and photos, John and I grabbed the camera and jetted over to the site of the new building to take a couple shots and see how things were progressing. I have to say, seeing a slab there suddenly makes the project appear to be much further shead than when it was just piles of dirt with pipes sticking up!

Before Christmas Break, we had ordered 120 iPod Touch units as part of the TIE program we host. Well, due to a mix-up in processing, we had 100 shipped instead of 120. One of the conditions of placing the order was that the units could not be received during the holiday break. The day after we placed the order, I got an email listing 20 boxes heading our way for delivery on December 23. Umm, you see a problem here? Well, I was able to get those diverted and delayed until after January 4. Rather, it turns out, they were scheduled for redelivery *on* January 4th and they came in today! Normally, that is great news. Unfortunately, it seems someone put their hand in our candy jar: 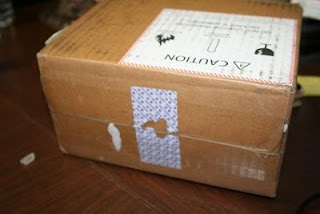 This box only had TWO units in it, even though there are FIVE serial number on the box. You may also notice that the factory seal appears to be broken and then resealed. That was some serious eagle-eyeing by John on that one! I had overlooked that little piece of info. I took pictures of the box (luckily I had opened the box from the bottom by mistake!) and sent them to our contact at Apple. We'll see where things go from there!