Apple's iPad - Cool and not-so-much in one fell swoop

This is my take on the Apple reveal today.  I was not there live, instead I watched it via live bloggers and video from various sources.

Steve Jobs, et al, showed off their new "not-quite-a-tablet" computing device:  The iPad. Yes.  Let that soak in a moment (no pun intended).  Does it look kinda familiar?  It should.  It's basically a big iPod Touch with some "bonus features" thrown in. 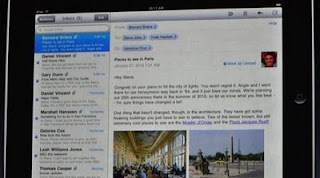 See the "home key" on the right?  Just like it's little brother.  One new feature is pop-down/pop-out menus, which make getting to settings inside apps easier.  The screen size (9.7 inches)  provides for a nice viewing area, considering there are no frills with which to be distracted.  The unit comes with a microphone, speakers, WiFi, Bluetooth, and standard 30-pin apple connector.  For $150 more than the asking price, one can also add 3G cellular surfing from AT&T ($14.99/250 MB per month or $29.99 for unlimited - no contracts). 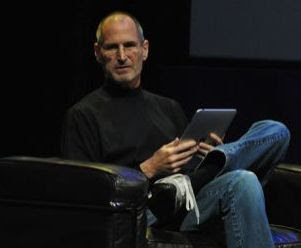 Much of the beginning demo featured Mr. Jobs hanging out in his chair, showing different apps on the big screen: browsing the web, watching a video in HD, reading email, etc.  At one point, some software people came out to talk about the "new" platform.  To me, the NY Times had the best showing.  They rewrote their iPhone app for the iPad and it looks like a newspaper: 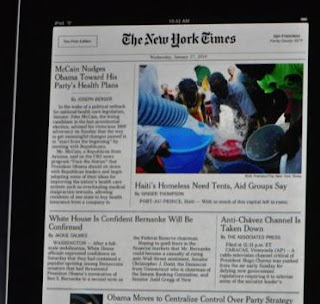 One of the cool things about it was the embedded video within an article.  Talk about marrying technologies.  EA did a demo of "Need for Speed: Shift," but frankly, it was like watching any other demo.  Nothing jaw-dropping there so far as I could tell.

The interface sports a qwerty keyboard that fills about half the screen, but as you can see, the keys are HUGE for such a little screen.  The presenters talked about iTunes, YouTube, Facebook, etc.  They also showed off their version of eReader: iBooks.  Now, THAT looked cool.  It actually looks like you are holding a book, with "pages" and even the illusion of a cover.  The iBookstore works like iTunes, so it will be easy for folks to pick up on that.

So, how much is this over-sized iPod Touch? 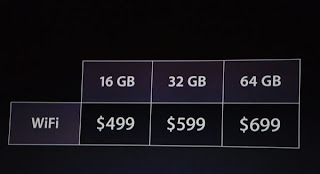 The real question is whether or not people are going to buy this thing.  I already have an iPod Touch, and while the prospect of having a much bigger screen is nice, I can't see running out to buy one.  It has NO usb ports and NO memory card reader.  Some people are complaining that it has no camera.  Maybe not, but I don't really see that as a huge drawback, considering what it is being used for.  Though, a user-facing camera would be nice for conferencing, I suppose.  It turns out there may be a device (here) that will add an SD slot and USB to the iPad, so who knows.  I am hoping to convince my boss we need one to demo/try out.  I think it is worth looking at, especially for education use.  Of course, schools could buy twice as many 8GB iTouches for the money as they could iPads, so I'm not sure it's worth it even then.

On, Plurk, there was a pros/cons discussion.  Here is food for thought:

*images edited from Engadget's live posting of the event.  Visit their whole take on it here:
http://i.engadget.com/2010/01/27/live-from-the-apple-tablet-latest-creation-event/?sort=newest&refresh=0
on January 27, 2010