Daily Photo (My Desk at Work) 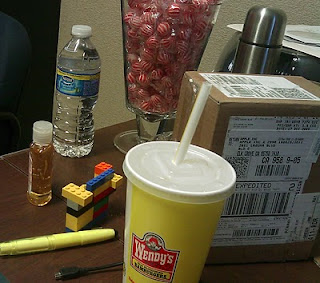 One corner of my desk at work

The mundane, the banal, the not-so-extraordinary shot above came from an inspirational spark as I tried to figure out just what to do for today's photo.  Upon closer examination, however, it reveals more about me than I realized.  Though what one would do with such information eludes me.

First of all, let's talk composition.  As things move from left to right (that is also the direction in which my computer rests), things more packed in, more compressed, leaving less and less "white space."  Also notice the amount of yellow in the photo.  In the scheme of office-based photography, I'd venture to say it's a lot of yellow.  Sure, one is a Wendy's cup, but still, one cannot deny the placement of the cup was not as random as perhaps even I had first thought.  Move from yellows to a splash of blue on the water bottle (unopened, by the way) to the red and white of the Christmas candies (which I won at the company party before the break).  A touch of chrome on the thermos-thingy behind the box, and of course the big brown box in front.  Yes, that is the same box shown in my post from yesterday describing the first day back after break.  The viewer's eye is drawn across the photo from left to right (if you notice space first) or right-to-left (if you notice the clutter first and move toward open spaces).