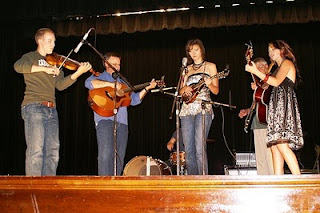 This picture was taken in 2007 in Hope, AR.  Hannah and some of the members of the band were performing their last concert before heading to Nashville to pursue the future of their musical careers.  I've been a fan of HBEE for several years now (before the time of this photo, even), having seen/heard them perform at some conference I was attending.  I was hooked from the very first note!  They have a great "down home" sound and their latest stuff is even more refined and as great as ever!

You can find one of their albums on iTunes and you can find a free sample of their latest songs here: https://www.noisetrade.com/edensedge#!!