Daily Photo (Ice, Ice, Maybe) and then some 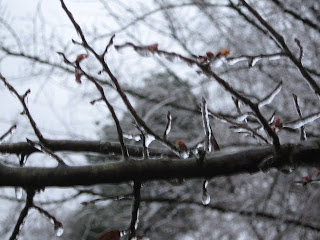 I took this picture this morning outside our front door.
Much of the northern 2/3 of Arkansas got hit hard with rain, sleet and snow.  Those of us in the southern part of the state mainly got rain.  Due to the cold temps, though, overnight, the rain managed to freeze itself to trees.  On the way home from work, I noticed most of the tree were free of ice until I got closer to home.  The closer I got to the house, the more ice I saw on treetops and branches.
I don't think we will much of anything overnight.  Initially, there were calls for more rain, some sleet and even snow flurries hitting around 3am or so tomorrow.  Everything looks like it will pass out around us (as most storms seem to do for our neck of the woods), and we will see a light freezing of the water that fell during the day.
Now, I know that people who are snowed in may be wishing they had what we have, but I was really hoping we'd see some snow.  I grew up in Western PA, lived in Colorado and Northern Virginia and I miss the white stuff in the winter. Yeah, it's a pain in the butt to deal with, but there is nothing like opening the front door and seeing everything covered in a soft, white blanket.
Unless you've been living in Amish Country or just don't pay much attention to anything tech-related, you know that Apple's new iPad is generating a LOT of talk. Some people see it as the death of netbooks while others see it as nothing more than an over-sized toy.
My take on this is simple: I wrote the bulk of my novel-in-progress on a MacBook and netbook.  There is no way I would attempt 50,000+ words on an iPad-type device.  In fact, I sort of have already.

Back in 2007, I received a Samsung Q1.  I looked back through old posts on here, and a quick looksie indicates I made ONE post regarding this "great, new" technology.  Why only one?  Because that's how long I enjoyed using the thing.  The number one issue?  Typing.  It was just too much of a pain to use as an everyday piece of equipment.  I see the iPad suffering the same fate.  It's too big to be taken seriously as a toy and too cumbersome to be taken seriously as a legitimate business tool.
The netbook fits the bill perfectly for most people: I can write a novel or I can play goofy games.
Instead of questions like, "Will the iPad replace netbooks," people should be asking, "Is the iPad Apple's biggest flop since Newton?"  Now, THAT'S a question worth answering.  Oh, and for the record, I am not a "Windows-flunkie" nor am I a "Mac Fanboy."  I love using both technologies.  In fact, this entry is being composed on an Apple MacBook.  So save your childish name-calling for the playground.  Thanks.
on January 29, 2010