At work, we've been having random, sporadic email problems. That is, email has been randomly and sporadically NOT being delivered to our system. Now, this is going to get a bit techie, but bear with me and enjoy the ride.

The state of Arkansas provides our office with email anti-virus and spam-marking features for our email. If a messages comes into the state network (not like the whole 'state' but rather the state-owned network for K12, higher ed, etc), those messages are scanned for viruses. If there is a virus, the message is killed long before it reaches our local network. If the message is spam (or believed to be spam), it is marked as spam and sent on to our system for handling. In our case, if the state marks it as spam, we put the message on hold for review then pass it along if it is not spam or delete it if it is spam. So far, so good.

Ah, but it turns out there is another 'feature' that we were not told about. 'Greylisting.' The way this works follows these lines: Person A, who is not on the state network, sends a message to me at work. The state system has never sen that email address before, so it sends it back to the original mail system and says, "I've never heard of you. Are you for real?" The other mail system is then supposed to re-send the message and say, "Why, yes. Yes I am for real." They shake hands and the message gets passed on to our system for delivery. How nice.

Here's the problem: In some cases, when the state system sends the "Are you for real?" message, the other server says, "Yeah, and I don't feel like playing this game with you." It never sends the message back, and Person A is never told of this. Person A shows they sent the message. Our system never got the message. And therein lies the rub. I spent the better part of ALL (expletive removed) DAY convincing the people at the state level that THEIR system was screwing up. Now, I know, technically, it isn't THEIR system messing things up, it's Person A's email system because it refuses to play the game. Sorry, but I don't See where we should refuse mail outright unless the system is a known spam offender (called "blacklisted").

The solution? Once I was able to PROVE that their system never sent us the message, I simple request that we be taken off the state spam filter. We have our own spam filter, and having the state's was a nice cushion, but if that means losing emails because other system don't play the same game, then it's not worth it to me.

Centurytel called me today after I spent some time with their tech support people on the phone last night. Turns out the problems with our Internet access had nothing to do with MY modem. It was a network switch about seven miles down the road. When I was on the phone last night, I calmly explained to the young man that I had run numerous tests and knew for a fact that the problem was far beyond the walls of my humble abode.

When the telephone guy called, he said, "you know Bob, right?" I do. He is one of the phone techs and lives down the road from us.
"Yes," I said.
"Well, he told me that you were pretty sharp with computers and such, and that I could talk tech to you..." And he did, and I understood what he was talking about and I told him what I had told the customer service guy. he laughed and basically asked if I needed a job.. LOL!

So, score another one for me. Yay Me (again)! 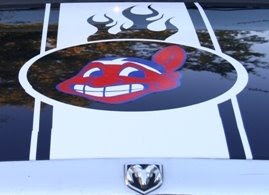 My aunt made a great point about the bubbles in the hood stripe on my truck - "You can't see it from the stands!" She also said I should have called her for tips on how to install the stripe without bubbles. That is probably a good idea. I'll have to remember that next time I get this wild hair to do something like this... Like next week or so.. :-) I do know some of the things I "SHOULD" have done like G-O S-L-O-W-L-Y, but really, who has time for that? :-)