Too much talking and a Golden Arch

I spent the day at one of my schools today, trying to help them knock out some work orders.

When I am working on a specific task, I am generally very focused on that task. I don't mind being interrupted from time to time, but I am on-task and I am trying to get things done. Evidently, not everyone shares that point of view.

One of the techs I was working with talked just about the whole time we were working. To be fair, a lot of what he said was very worthwhile. My only real issue was that while he was talking, we weren't necessarily getting things done...

For example, I arrived at the technology building around 9:00am. We did not actually get to the school that needed help until nearly 10:00am, mostly due to kibitzing. We left around noon for lunch, only having accomplished about half of the goal for the day. After lunch, we stood around as even more talking was going on until we rode back over to the school to finish up.

In my mind, I pictured knocking out 8-10 work orders. We managed to knock out 2 (possibly 3 if the two laptops were listed in separate issues - I have no idea). Granted, one work order was to install and set up six new computers and LCDs that were still in boxes. No matter how you cut it, setting up new computers is time-consuming. There is no thinking involved for as many as I have done over the years, but you cannot really get around the time involved unless you have more bodies to divide and conquer the task.

I plan on going back again whenever I can put it on my schedule. Why would I do that? Because they are still way behind, and even though I was disappointed with just two (or three) work orders getting finished, that was two more than they had been able to do.

I'm just going to say it and get it over with.... On Friday, the 10th, I've got a skin biopsy on my leg. There's some kind of something on the back of my leg, just a little something, that the doctor wants to cut off. Yeah, I don't do well with things like that. I'm not a BIG baby about it, but I am a little baby about it.

I have an intense fear of needles. And, that's not exactly right... It's the memories of my childhood when a nurse stuck me with a needle and could not get a vein. Instead of removing the needle, she dug around in the crook of my arm until she was satisfied. She tore up parts inside my arm I didn't even know I had.

So, on Friday, the doc (or nurse, really) is going to stick a needle in my leg so that I won't feel them cutting out the thing back there. I'm sure it'll be fine. Really....

One of my favorite pictures from our St. Louis trip in 2007. We were on a boat and I noticed the sun was getting into the perfect position. I snapped pictures until I got the shot I wanted: 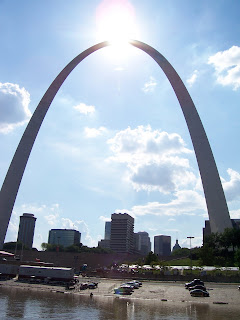