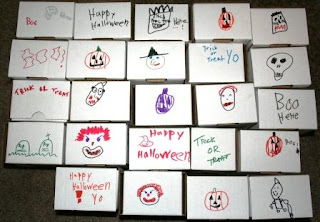 Over on my Indians baseball card blog, I'm giving away baseball cards to anyone that knocks on the door and says "Trick or Treat." (link)

The picture above is of the first set of boxes I sent out to my Halloween trick-or-treaters. As you can see, I had some help with the decorating! :-)

Well, I had my first co-op area tech meeting today. I had a GREAT turnout! I honestly wasn't sure how many techs would come because we've had low numbers in the past. I was excited that I had nearly every district show up.

I try to be focused when it comes to the meetings I'm in charge of running. I sent an agenda to the techs and to their Superintendents. I wanted everyone to know that we weren't just up here shooting the breeze, killing time, pulling the techs away from the districts. We covered some issues related to what's happening at the state level, web site requirements, questions and issues each tech was facing locally, and other related topics.

The best part of all was the active participation of the techs. If you've ever had to sit through a meeting, you know that often, everyone sits around and no one offers input. Well, everyone contributed.

When I told my director about the meeting, she asked if I bought the group lunch. I told her that I didn't know I could. She let me know that rules, and I will be buying the techs some lunch in the future for sure!!

It's been a long time since I've a hosted a meeting that felt as helpful and as productive as this one. I've hosted meetings in recent years, but for whatever reason, I just couldn't get my 'stuff' together enough to make those seem worthwhile. I think those days are behind me. We'll see next month.

Do stores have their Christmas stuff out where you are? Several places around Hope are already sporting Christmas trees in the store windows. I love Christmas as much as the next person, but isn't the fact that it is not even HALLOWEEN something that should throw up a red flag or two? I mean, shouldn't there be some kind of law or regulation against putting up your Christmas decorations before you even have your Halloween ones up? I'm just sayin...

The World Series starts tonight! At the time of this writing, the Phillies are leading 2-0 in the top of the 2nd inning. I'm pulling for the Rays.
on October 22, 2008