I know I can't speak for ALL bloggers, but from my own experience and from reading several other bloggers' posts, one goal we often set for ourselves seems easily attainable yet often meets with great difficulty. What is that goal? APAD. Wait, no, not one of my favorite baseball blogging sites, "A Pack A Day," but rather, the goal is A Post A Day. That is, many bloggers I know set out to post at least one thing every day. I mean, come on, how hard could it be to come up with one entry in a day?

Have you seen the dates of my posts? For example, even this post is a good 2-3 days after the last one.

What happens that the goal is often left floundering on the floor, gasping for breath? Lots of things.

I'd say, for me, the number one is life in general. I mean, there's the day-to-day things that have to be done and it's just 'too hard' to get in a post, even a short one, after you've spent all your energy just getting yourself to the point you feel like you could put your butt in the bed. But, even I have to admit that there are times I'll be up until 3am and yet not post anything.

So, again for me, the second thing stopping is me is my own ability to become easily distracted away from posting - whether checking other blogs, playing online games, updating my Facebook, whatever. Stopping to jot down a few thoughts just never crosses my mind.

The closest I've come to posting every day for an extended period of time was during my scratch-off tourney on tribecards. And, admittedly, it took a lot of discipline to achieve that. But, there were two factors that kept me posting nearly every day during that time: 1) it was fun, and 2) people were counting on it (or i felt like they were, anyway).

Frankly, sometimes writing is just not 'fun,' especially if you feel like you have nothing to contribute to the overall scheme of things. I think that is probably the number one reason why blogs fail to begin with. People start them out and it's fun, but soon life makes posting 'not fun.' But, the second issue weighs pretty heavily into things as well. I mean, even though blogging is a form of personal expression (even professional blogs require that personalization or else we would be reading the newspaper), many bloggers would like to know that folks are relying on their posts and input.

The latter does not play so much into my posting on here because I know there are at least a handful of folks who check it out every night,, just to see what randomness has leaked out of the space between my ears.

Several bloggers I know have recently committed themselves to posting something relevant and/or worthwhile every single day. I hope they succeed, and I wish them well!!

Speaking of lofty goals, what the heck is up with the Tampa Bay Rays!?! How hard is it to win just one more stupid game!? I am posting this while Game 7 of the division series is being played. Seriously. They were 7 outs away. Now, they are a lifetime away. Look, I am not a rays fan, but after last year's thrashing of the Tribe, I am for anyone playing against the Red Sox. Just keep them out of the World Series... 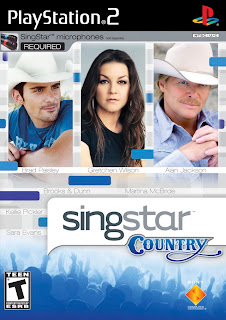 Did you know that SingStar is releasing a COUNTRY version on October 28!?? Can you say WAHOO!!? Yeah, buddy! We went out to the website to get the lowdown on the 30 tracks in the game, and I can promise there is going to be some seriously awful karaoke going on around here in about two weeks!!