Codeine and getting the Tribe on Board

I haven't written in a while because I have been sick. What started out as a head cold made its way into my chest and by Sunday, I was a mess. So, Monday, I went to the doctor and he put me on codeine, Albuteral(sp?), and antibiotic. I went to work today (Tuesday) and took a dose of the codeine.

Heavy machinery? Forget that. I should not be allowed to operate the "Reply" button on a mailing list! What started out as a normal day quickly became a debate on global warming and human impact. My initial response brought a few agreeing replies and a lot of opposing views. My viewpoint is that humans have very little actual influence on things like global warming and the earth basically takes care of itself (hence ice ages, etc). As you can imagine, a LOT of people do hold that view, as many of my readers may not share that view. I will say that it was a very interesting discussion and it ended amiably enough... :-) 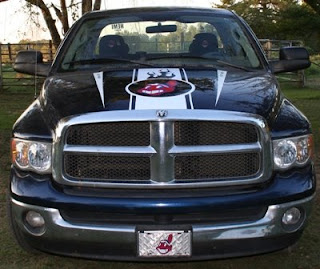 Some time ago, I contacted Hammerhead-Grafix about making bed stripes for my HEMI. After we talked back and forth a few times, he made some custom stripes for me. Yes, I mentioned these were supposed to be bed stripes (stripes that are placed vertically on the sides of the truck bed). Well, they came in about 25% bigger than I had expected. So, after taking a couple walks around the truck, inspiration struck (with some input from my son and Mom).

I had never placed anything remotely close to this size before, and there are a lot of flaws. But my Tyler put it all in perspective. When I mentioned the faults, he said, "You'll get over it." And, you know, he's right. I love my new hood stripe! Plus, I have an extra to boot. :-) 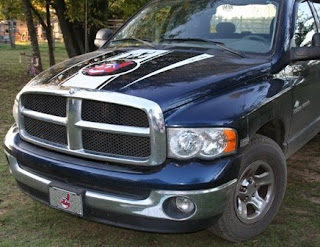