Since I was off yesterday, I had several places I had to visit today for work. I decided that I would give you a glimpse of what one of days is like:

8:00a-8:15a - Checked my email, had to hunt down a binder that I needed to deliver to one of the schools I would visit today, grabbed a printer, copied Adobe Reader 8 to a flash drive, downloaded and copied an Adobe 8 patch for the SEAS early childhood (ECH) software we use (I say 'we' but really, it's the early childhood teachers)

8:15a-9:00a - Drove to the Hope ECH classroom and installed Reader 8 and the patch. I had to wait around for the teacher because she had gone to the co-op. I don't know how our vehicles did not cross paths. The teacher got back to the classroom just as I was leaving.

9:03a - Left the Hope ECH classroom, heading toward Lewisville, AR. As I came up to the first intersection, there were a bunch of guys painting new lines on the road (turn lanes and such). I pissed them off because I went around them and ended up driving over their newly painter road. Oh well.

9:25a-10:20a - Lewisville, AR. The ECH classroom in Lewisville was having a screen problem on the computers for the kids. Turns out the computers had been set up with flat-screen, high-resolution monitors, but then were hooked up to crt monitors (old style) that did not support the high resolution. I'll post the resolution fix at the end of this post. It comes in handy when you CAN'T SEE what's on the screen! Once the screen resolutions were both fixed, I moved on to the teacher's computer.

Each of the ECH teachers received a "Logitech ChatCam for Skype" which looks like a little blue and white eyeball. I installed the software, then downloaded and installed Skype. While downloading Skype, I logged into the co-op's web site to check on outstanding work orders. There were a couple new ones, so I addressed those and finished up. One of them said that the ECH classroom in Fouke was messed up, however earlier this morning, I was told that the problem was in Bradley. I called the ECH Coordinator, and after some discussion, she confirmed that the problem was in Bradley.

In Lewisville, there is a corner shop that sells sandwiches and such, called "Burge's." Parked at Burge's was this: 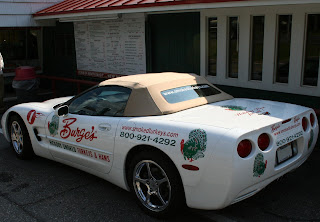 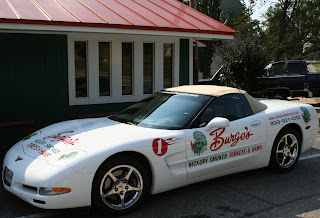 After I took the pictures, I headed down the road to Bradley, AR. Their ECH classroom was having problems with the SmartBoard. They could not get it to come on.

10:45a-11:22a - Bradley, AR. I arrived at 10:45a to find the SmartBoard completely turned off. Usually the power LED on the board is orange when not in use, but this one was dark. It was a power problem. I just had to figure out WHAT power problem. I tried simply moving the power plug to different outlets, but that did not cure things. After trying a few other things, I went to the truck, grabbed an extension cord and a spare power cable. I hooked those up, and the board came to life (technically, the projector came to life)! Okay, so the problem was definitely the power cord from the projector to the outlet. I ultimately 'adjusted' the prongs on the original power cable and plugged it in. Tah-Dah! Problem solved.

As I was leaving, two children had gotten into a fight. They were brothers. After a good talking to, the teacher asked one of the boys, "Can you go outside without fighting?" The boy answered, "No." Then, he started heading for the door. As I walked out the door, I heard the teacher behind me explaining to the boy how he needed to pay attention to the QUESTION being asked.... LOL, gotta love kids!

I headed for my next stop - Fouke, AR.

11:40a - The road between Bradley and Fouke is all two-lane backroads until you get to HWY 549. At that point, one can either get on the four-lane bypass (549) or stay on HWY71, which is two-lane. I opted to stay on the two-lane road since I wasn't really in a hurry. It turned out to be worth the leisurely drive. The old-times in front of me was doing a perfectly legal 55mph and it gave me time to look around. The leaves on the trees were beautiful, just starting to lose their green as they turned to yellow and orange. So, I took the drive to Fouke. Yes, the same Fouke that's been all over the news because of Tony Alamo. On the way into town, I saw a VW bug that was decorated like Herbie the Love Bug at a convenience store. I figured I would run past there again after I was done at the school.

11:51a-12:15p - Fouke, AR. Removed a Konica-Minolta laser printer that was a piece of junk. In its place, I installed the HP laser printer that I put in my truck this morning. The teacher also wanted me to disable the "sleep" function on her computer, so I took care of that. We had a brief discussion about her "FrontRow" wireless audio system and where to put it in the classroom.

The "Love Bug" was gone, so I pointed my truck toward my next destination: Genoa, AR. On my way out of Fouke, though, I stopped on the side of the road and snapped a quick picture of the Alamo church: 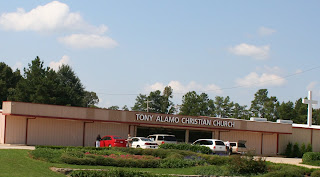 12:30p - I turned onto HWY237 and amazingly, the Herbie Love Bug car pulled out from a side-street onto the road in front of me!! How cool is that!? 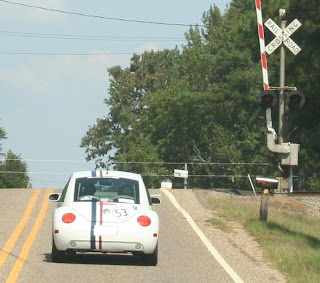 12:38p - Genoa, AR. I parked my truck and took the binder into the principal. He was out of the office, so I left it with the secretary. Three minutes after I had pulled into the school, I was heading out again.

12:43p-1:55p - Headed back to the office. I decided to swing past the closest Mickey-D's for some lunch, and as I did, there were several large planes making passes over the Texarkana airport: 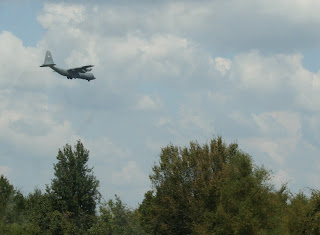 I grabbed lunch, and drove down the road. Since there was a lot of time to kill, my mind wandered a bit.

Here is one random thought: I wonder if anyone is doing any kind of research into connecting fiber optics or some kind of wiring that would allow people to take pictures of what they see with their eyes. I mean, maybe there would be some kind of connectors or something in glasses maybe, attached to wires like headphones that would record the images. Not necessarily video, although that would be cool, but still pictures. That way, you wouldn't have to necessarily stop to get a photo of something you wanted.

Another random thought: When Shan's Grandmother was alive, every time we would cross over the Red River, she would make a comment about the river's height. She would say, "Oh, the river's down today," or "the river is up again." I don't really know the significance of that, but now every time I cross over the river, I look to see if the river is low or high. Funny how little things like that stick with you...

2:40-2:45 - Troubleshooting user's mouse. It's wireless and she replaced the battery. I had to show her and another co-worker how to press the 'connect' button on the usb 'puck' and the mouse to get things synchronized.

Around 3:10 or so, I went to the men's room. I don't tell you that so that you know whether or not I take restroom breaks, but rather because sometimes I surprise myself. As I went into the restroom, I vaguely recalled John saying something about "bubbles coming up from the commode when (he) flushed it." So, before I attempted anything, I flushed. Sure enough, the water rose and did not fall back again as any normal toilet would. I walked out, after making sure the water did not keep rising, asked the clerk to get a plumber in there, and then left to use the other men's room. Normally, I wouldn't think twice about using the facilities, but when that thought popped in my head, I knew I had better make sure before the whole was blamed on me...

3:30-4:00 - Did whatever to kill off half an hour - checked e-mail, played around with different aspects of the company web sites, read through the trade magazines some more.

So, there you have it. One of my typically untypical days! Thanks for riding along.

Screen Resolution Fix By Keyboard Commands: So, you can't see what's on the screen because your Windows XP is set for a resolution higher than the attached monitor? Well, hopefully these commands will help you fix that:

That should do it!