Dealing with the Dealership

Shan called the dealer where she bought her van. The service department and she played phone tag, but finally they called back. The service guy asked what time she wanted to bring in her van. She said around 930 or 10. He said, it would be better if she brought it in around 730 or 8. Then, he said that they don't make appointments. Why bother asking what time she wanted to bring it in if they don't make appointments? Whatever.

So, we took the van in. Shan got a free oil change (1st one is free from them) and a software upgrade to fix a problem with the sliding doors. Nothing like a software bug to screw up opening and closing a door. The dealer had to order a part for her rear hatch because it is acting like a gear is slipping on the remote control mechanism. Finally, there is a problem in which the rear seat folks cannot access the satellite radio channels. The dealer said the fixed it. We didn't actually TALK to them to know what they did, and of course when WE checked it, things were not working right. I called the dealership and was told that the service manager wanted to talk to me to SHOW me how to fix it. Well, since we will be back up there later for the rear hatch, they can show us then. In the meantime, a quick search online only revealed other people having the same problem with no solutions offered. Brilliant.

On the plus side, we ate at Long John Silvers for lunch and got to see Aunt Linnie!

Do you recognize this girl? 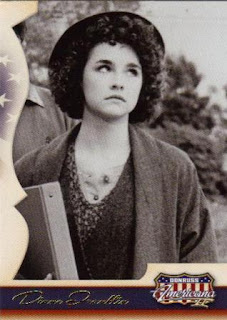 That's right, the girl from "Better Off Dead." I bought a box of Donruss brand "Americana II" collector cards and this was one of the cards. I also pulled a card with Vicki Lawrence and it has a 'actual piece of clothing worn by the actress' embedded in it. Seriously. I'm just hoping there's a Vickie Lawrence fan on eBay willing to buy it - or two that are willing to get into a pricing war over it... 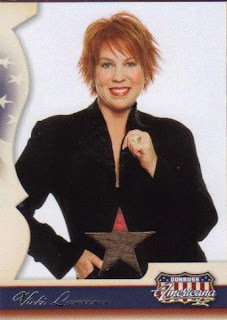