For Father's Day this past year, Shan and the kids got tickets to the Rangers-Indians game at Rangers Stadium! It feels like it took forever for the day to get here, but this past Saturday, it finally arrived!

We loaded up the van and headed out to our hotel. The drive is an easy one - get on I-30 and point the vehicle at Six Flags in Arlington. It is a LONG one, though. We stopped about halfway down for a break, then headed for the hotel.

We stayed at the Baymont Arlington-Six Flags. It was probably one of the smallest rooms we have ever stayed in. We were told it was non-smoking, but we knew right away people had smoked in it. We should have changed rooms, but we didn't.

After we arrived, we ran out to do some quick shopping then came back to the hotel because they offer a Free shuttle to the game. It leaves at 5:30, 6:00, 6:30, and 7:00, or so we were told. The first "trolley" (a bus made up to look like a trolley) came through at nearly 6:00. When 6:30 rolled around, I said we were walking to the game. The stadium was about a mile from the hotel. But, it was HOT and we'd already been standing for more than an hour. We started heading off anyway, and saw the trolley rolling up. We walked back and got on the trolley. I have to say, it was much nicer riding (though it was standing room only) than walking.

We arrived at the stadium and got off the trolley in front of the ballpark! It is a very nice stadium, but as far as ballparks go, I have to say there was nothing "ooo-aaah" about it. That's not a bad thing, just how it is. What did I care? I was going to see THE TRIBE!

We found our way to our seats, which was only up one flight of stairs. Someone was in our seats, but that's because it's a little confusing as to which side you are actually supposed to be on. We got it squared away though and plopped ourselves down. The players were taking the field to warm up as some preliminary events were taking place.

(Yes, the guy with is back to me is NOLAN RYAN!)

We sat and watched while I took pictures. Then Melissa Lawson (yes, from Arlington, from Nashville Star!) sang the National Anthem. Did I take a picture of her? No. Why not? I'm a ding-bat. After the Anthem, I went after food... I never would have guessed what was happening on field while I had been securing provisions....

That's okay, we entertained ourselves by taking pictures:

Oh, and while Shan had the camera and was distracted, the woman in front of me leaned over to the empty seat next to her and promptly threw her guts up. Shan never saw it, never heard it. How she did not SMELL it was beyond me. It was so bad that when her friends came back to sit down, the guy said, "I'm sorry, but I can't sit here. That smell is killing me." Tell me about bro... The woman and her (presumed) husband tried to wash it some and cover it with paper towels, but we all know how well THAT works... UGH... I distracted myself after that, and just kept watching the game, trying not to think about it.

Eventually, the rain slowed enough (then stopped) so that we could See some baseball action! Grady Sizemore stole at least THREE BASES that night! It was awesome! During one play, two runners (on first and second) stole at the same time!

Unfortunately, the Rangers got the jump on us and had a 7-1 lead at the bottom of the 4th inning. They scored six runs in the fourth. Ouch. But, the Tribe would not be outdone, and we came back and scored six of our own runs in the 5th! The score was tied 7-7! The Indians scored another run in the 8th, and would go on to WIN THE GAME!

We got back to the hotel, taking the trolley to keep from walking. Turns out there were almost ALL Indians fans on the trolley from all over the US! It was very cool!

On Sunday, the kids went for a swim before we headed back home. One of the best weekends ever!! 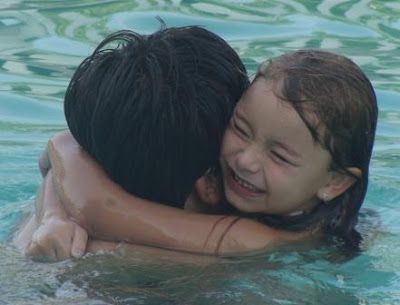 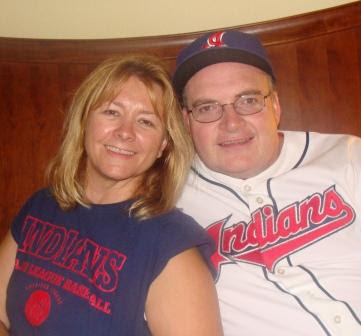 You can see all the pics from the Tribe game and swimming (plus a few surprises) here!
on August 25, 2008