The past two days...

Lately, it seems my posts are coming about two days apart - evident by the starting line, "For the past two days, I've been..."

Well, the same holds true today. For the past two days, John and I have ben teaching a group of nine teachers how to use digital cameras with Movie Maker. I talked to them about some techniques of using a video camera, some ideas how they could use video cameras in the classroom, and then we turned them loose with video cameras. Not long a go, the co-op bought a lab set of Flip Video cameras. They were only $99 at Sam's! These are GREAT little cameras that have a USB connector built-in! Point, shoot, connect, edit! Awesome!

We divided the room into three groups of three, and they had to come up with a project idea, outline or storyboard it, shoot video, then pull the videos into the computers to create a finished product. They did amazingly well! Some of them had never touched a video camera, never heard of Mobie Maker, or knew what 'video editing' even was! By the end, all that changed!

One group visited Clinton's birthplace, another did a cute video on Hope watermelons, and the third did a 'commercial' about the Co-op itself. Everyone had cool title sequences for the beginning, used transitions between clips, added text to video segments and brought in digital photos to the project, then ended with rolling credits. Each group also used music in the background!

I am doing a one-day version of the Movie Maker class next week with a different group of folks. Next year, I think we will do the Video Boot Camp (as this two-day program is called) with Premiere Elements. It's a bit more robust than Movie Maker for the folks who want more UMPH in their finished products.

On my Indians site, I am gearing up to run a Scratch-off Tournament. Head over to the site and check it out. If you're a baseball card collector (or just want to have some fun), respond to the post and ask to be signed up! I'm giving away game-used and autographed cards as prizes! Why? I thought it would be fun to do!

Here are some pictures I took today (Thursday): 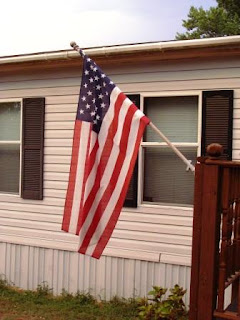 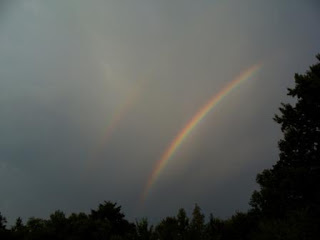 I love how our flag looks hanging off the deck! And the rainbow really WAS that bright! 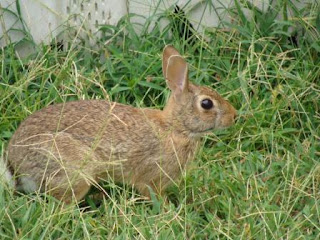 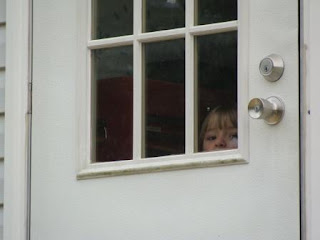 This bunny came out from behind the air conditioner while I was taking pictures of Emily trying to hide from me! 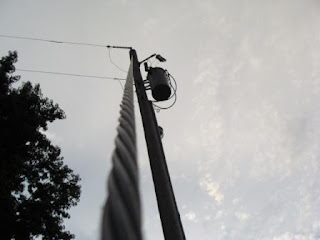 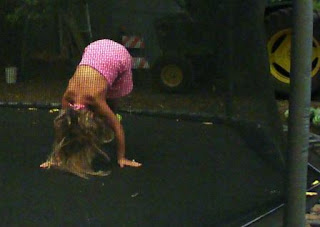 I put the camera on the guy-wire on a nearby electrical pole. Emily played on the trampoline while I snapped photos.
on July 31, 2008