Wow, I just realized that my previous post marked the 500th post I've made to PoppedInMyHead! I feel like Jim Thome (or one of the few other players to hit 500 home runs). Okay, I admit, not all my posts have been home runs. Some of them may have even been strike outs, but either way, I am amazed that I've hit 500. Actually, I am even MORE surprised that folks are still reading after 500.. LOL!

When I started blogging, the main reason was to have a place to keep some things I had posted on other sites, but to consolidate it down to a single site. As time went on, I've posted about almost anything that's popped in my head. The main thing, though, is to keep on posting. I figure the law of averages will mean that something will catch SOMEONE'S attention eventually. Then again, if I ended up only posting to myself, that's fine too. Don't get me wrong, I am VERY grateful for anyone and everyone that stops by to see what crazy notion I've come up with lately, or what new way I have of showing off pictures!

I neglected to mention that I won a prize while I was in San Antonio at the NECC conference. By the time I got back from Disney World, my office had all kinds of mail and boxes. One of them contained a classroom response system. This one has 32 remotes that students can use to answer questions in game-show fashion. There is also software and the receiver in the box, and the whole thing is worth about $800 or so! I have played with their software a little, and even made a power point show to go with it. I still have some training I need on it, but I am letting Shan have it for her classroom. I think it'll be "way cool!" 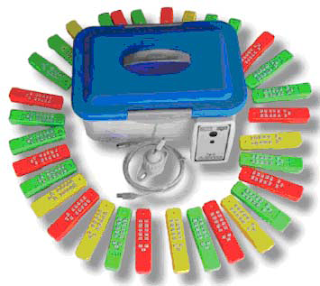 I spent the past two days pulling cabling for a district. They had three drop points and needed 18 runs of wire. Luckily, I had thought ahead to buy three boxes of cabling, so I only had to pull six runs of wiring (three in each run). Then, I spent a decent amount of time putting the end on each cable.

It is a task I did many, many times while working for SAU in Magnolia, and then while working for South Central Co-op in Camden. Last year, I helped pull cable for this same district but in another room. Last year, I took some help with me (Marilyn). Since she no longer works for the Co-op, I went at it alone this time (John was teaching a DL class). I have to say that having to do it alone was not as bad as I had been dreading. The room was cool, since it had its own air conditioner and I kept the lights off - the natural light kept the room lit well enough.

I am the jack of all trades and master of none, for sure! 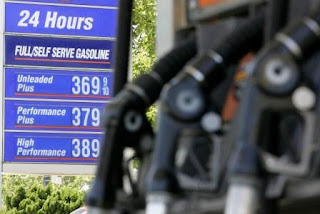 (Not my photo, but I wish I had taken it!)
Of course, the highlight of the trip was finding the $3.69 gas! I never thought I would be HAPPY to see $3.69 gasoline. For some reason, cheaper gasoline can be found at a little station just north of Lewisville, AR on Hwy 29. They sell gas cheaper than ANYONE within our usual driving radius. There is no real reason I can think of, either - they are not on a major highway, they are not a big chain, they have other stations nearby that sell gas at the same rate as other stations. They have no real competition, so far as I can tell. Yet, they consistently offer up their gasoline for 10-20 or even 30 cents cheaper than their neighboring gas stations....

I am not getting TOO excited yet, but I found a decal place that will make the custom bed stripes I want for my truck that will have the Indians logo on them. Once I get them and install them on the truck, I'll take pictures.... Stay Tuned!
on July 29, 2008